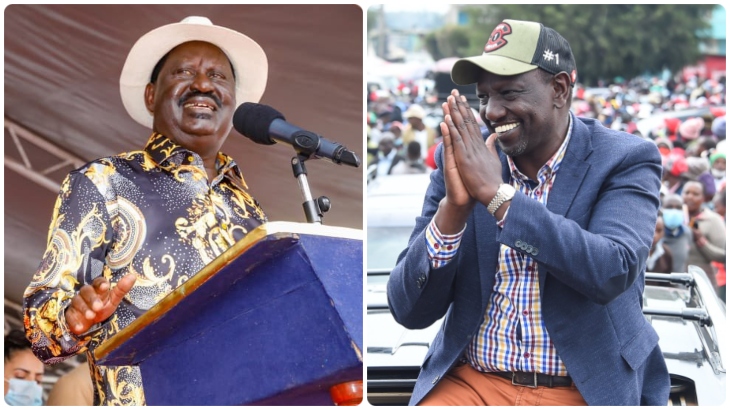 The battle lines for the 2022 General Election have evidently been drawn between what Deputy President William Ruto often describes as 'hustlers versus dynasties', or the hoi polloi versus the power brokers of our generation.

DP William Ruto has dismissed all other 2022 presidential hopefuls as too weak to present any serious competition.

Speaking in an interview on a local TV station, DP William Ruto said the only worthy competitor he can face is Raila Odinga.

“Raila Odinga is my competitor. He is the most formidable opponent I have in 2022. If Raila will not be my competitor, who will be? From where I sit, the strongest forces we have are the hustlers and the ODM team…” he said on Thursday, April 15.

Ruto echoed the sentiments of Elgeyo Marakwet Senator Kipchumba Murkomen who equally dismissed any possibility of an alliance between the DP William Ruto and the ODM leader.

“…We have never had and are not planning to have a conversation towards forming a political alliance with ODM… We in the hustler nation believe that the only credible competitor we have in the country is Raila Odinga,” the Senator said.

Speaking during an interview with Citizen TV on Tuesday, April 13, Murkomen, a former Senate Majority Leader, said Ruto was only willing to work with those who will support his presidential bid.

His elder brother Oburu Odinga is however on record saying the opposition chief must be on the presidential ballot in the forthcoming General Election.

With slightly over 15 months left to the highly anticipated polls, William Ruto is the only senior politician who has clearly indicated his intentions to vie for the presidency.

The only other candidate who has made clear his intention is a former minister and Kimilili MP Mukhisa Kituyi.

Other senior politicians like Musalia Mudavadi, Kalonzo Musyoka, Moses Wetangula, and Gideon Moi have formed an alliance, One Kenya, but they have not settled on a presidential candidate.