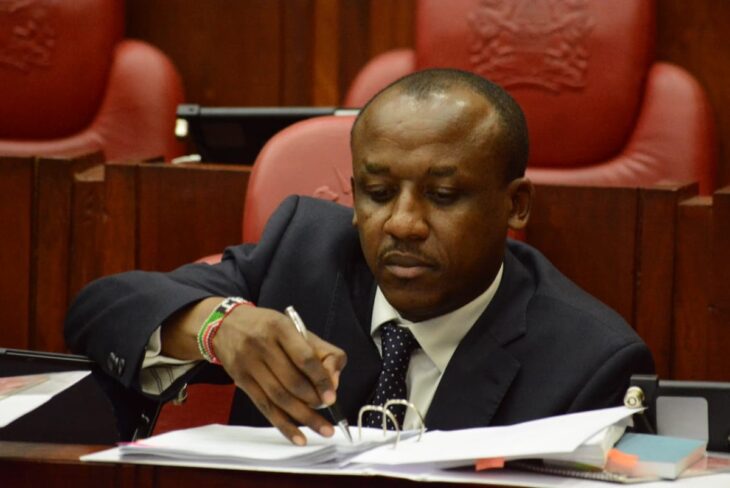 When the story of Kenya’s youthful politicians who are no doubt the next generation of political leaders is written, there are names that will surely not miss on the list.

These are the current crop of youthful politicians in Kenya proving age is just a number. They are brilliant, aggressive, vocal, eloquent, and masters of the dais.

There is no doubt they are ready to take the mantle of political leadership from the old guard in a country with a high population of youths.

Kivumbi.co.ke highlights some of these fearless youthful politicians and tomorrow’s political leaders in no particular order.

At just 36 years of age, Johson Sakaja has risen to political highs his peers can only dream of. He has the mind of a 50-year-old and when he speaks, his lovers and haters literally hang to his every word.

He always appears the voice of reason in senate debates, national conversations, and TV interviews- a joy to watch.

Having risen from a campaign strategist in the Mwai Kibaki era, Sakaja played a crucial role in the election of Uhuru and Ruto in 2013 as well as 2017.

The fact he takes a stand regardless of his party position on a matter has fashioned Sakaja as an independent thinker and his own man.

It is not clear which political seat he will go for in 2022 having risen from a nominated MP (2013-2017) to Nairobi county Senator (2017-to date). What is clear though is that Sakaja’s political journey is just getting started.

Laikipia Woman representative often describes her entry into politics as a baptism by fire. At just 34, a bubbly Waruguru is causing political waves and has managed to stand out not only as a person of influence in Mt. Kenya politics but also nationally.

Even though her ever-shifting allegiance has made her unpredictable, she has managed to remain relevant both at on President Uhuru and DP Ruto’s side.

Once a staunch follower of Tangatanga, Waruguru surprised many by jumping into the BBI bandwagon last year and warming up to ODM leader Raila Odinga.

However, this did not last long as she, later on, came to declare that BBI was unpopular in the Central region.

Word has it she has set her sights on a parliamentary seat as she seeks a political position with more clout.

Her fearlessness and outspoken nature is evident in the manner in which she takes on opponents in situations most of her peers will chose to be silent and invisible.

41-year-old Kangata’s journey to the national political scene has been long and winding but he has managed to fashion himself as a promising future political leader in Kenya.

His rouble-rousing political career started at the University of Nairobi where he was suspended for 2 years before returning to complete his degree in 2003 following an amnesty by the NARC government to suspended students.

He has risenf from Uniersity politics, ward, parliamentary to now the senator for Murang’a, a position that has come with a mixed bag of fortunes.

The lawyer has not eared wading into the murky BBI politics, at one point writing a letter to Uhuru telling the president that the electorate would defeat the BBI vote.

This was to later earn him a sack from his influential position in Senate but that has not weighed him down, he still supports the hustler nation without fear.

Since joining Ruto’s camp, he has remained vocal and a powerful tool to ensure the DP’s popularity in Mt. Kenya region grows.

With Murang’a governor retiring in 2022, who knows whether or not Irungu Kang’ata will throw himself into the ring? Nobody, but based on his political journey, there is not stopping for the lawyer.

The former celebrated journalist’s transition into politics has been some sort of a fairytale. While many dither when they switch careers, Moha has managed to keep his star shining.

It is worth noting he is always going against the grain and winning while at it.

First he took on Raila Odinga’s ODM party after losing in the nomination and he won the Nyali parliamentary seat in 2017 against all odds.

The outspoken professional journalist has also been a vocal and fierce supporter of Deputy President William Ruto, something that has fashioned him as a man who takes a stand and abides by it.

His mastery of English, Swahili, and Kikuyu has endeared him to crowds and when he speaks, his supporters literally hang by his every word.

Moha is known to be fearless and daring. His political career is no doubt just getting started and Kenyans will see quite a lot of him in the future.

At the core of the ODM party, is a 34-year-old Secretary-General whose fearlessness, eloquence, and mastery of the law is something to marvel at.

Edwin Sifuna’s political career is bright even though he unsuccessfully vied for the Nairobi Senatorial seat in 2017.

His loyalty to his political idol, Riala Odinga is unmatched and the ease with which he debates and handle his opponents or those of his ODM party has elevated him to levels his peers can only wish for.

He is among the few brilliant ODM politician who are likely to take the party forward when stalwarts like Kisumu governor Anyang Nyong’o, Raila Odinga, James Orengo etc retire.

Having been introduced into politics by DP William Ruto, 38-year-old Omanga has mastered the art just like his master.

She has worked her way up to national politics and while she is invisible within senate during debates, she knows how to play her politics outside parliament.

She has stood strong storms such as her expulsion from Jubilee Party. While staying afloat, Omanga has had a major impact in supporting communities in Nairobi, hence her moniker ‘Mama Miradi’

She has accompanied Ruto to major events and stood firm for the hustler nation, even if it means engaging her opponents physically.

This year, Omanga who was yearning for a chance to speak to her community engaged in a physical fight during the burial of Deputy Governor Joash Maangi’s father.

Well, Kuria is not very young but would be considered youtfull considering the average age of most politicians in the country.

The presidnet’s MP is a typical rouble rouser and does not fear even going against hsi party boss Uhuru Kenyatta.

The 50-year-old is fearless and takes on his opponents whichever way he deems fit. This has landed him in trouble several times, including being accused of hate speech.

Now, he is on a mission to test his influence as a one-man. Kuria has fronted a George Koimburi as his candidate in Juja Constituency by-elections under his own People’s Empowerment Party.

He is set to flex muscles with President Uhuru’s candidate on the Jubilee ticket.

Moses Kuria will no doubt play a role in Mt kenya succession politics upon the retirement of Uhuru Kenyatta in 2022.

He has emerged strongly as Raila’s handyman ahead of James Orengo, Anyang Nyong’o and the likes. This is seen by the responsibilities delegate to him by Raila.

A sharp and witty debater, the 43-year-old appears like someone who can take on bigger leadership roles in ODM, Kenya’s biggest opposition party.

His rise from a little-known shopkeeper in Migori town to being Raila’s blue-eyed boy is evidence of how far Junet can go in politics.

Hia ability to maintain a smile whether angry or happy leaves both friends and foes confused.

His political option in 2022 are not clear but what is clear is that he is going nowhere and will grae the country’s politics for quite a long time.

Kipchumba Murkomen burst into the political limelight in the run-up to the 2013 General Election where he won his current senate seat in Elgeyo Maakwet at the first attempt at elective politics.

Since then, his star has kept shining owing largely to his eloquence, brilliance, and fearlessness in situations most of his peers opt to remain silent lukewarm.

When he speaks, many see William Ruto speaking through him and he holds no prisoners especially in criticising Uhuru Kenyatta and State House operatives for how they treat the Deputy President.

Even after being ejected from the Senate Majority Leader position, Murkomen’s influence has not been lost. In several occasions, he has defended the DP against attacks from Jubilee leaders such as David Murathe and Raphael Tuju.

The 42-year-old political future is no doubt as he has elevated himself to national politics. The future can only be bright.

The Narok Senator has positioned himself in the right political state to arguably take over Maasai political kingpinship left vacant by the likes of William Ole Ntimama and Joseph Nkaiserry.

The 46-year-old Ledama has remained unpredictable in his political moves as he shows no allegiance to neither President Uhuru, his party leader Raila Odinga nor, DP William Ruto.

The outspoken legislator has fashioned himself as a staunch defender of the common man. he challenges the government of the day and corrupt politicians and government officials in equal measure.

The first time legislator has really worked his way up the national political arena and postioned himself for even greater things ahead.

He shoots straight from the hip and his fearlessness has had him earn a warning from National Cohesion and Integration Commission over utterances that were considered hateful and insightful.

A strong debater and perhaps a future strong political leader of the Maasai community.

The Makueni Senator’s political career started after the demise of his father, Mutula kilonzo in April, 2013 and while it might seem accidental, he has worked his way to be his own man.

The lawyer’s brilliance and articulate debating in and outside parliament is something to behold and every time he speaks, he oozes his late father’s brilliance.

The 46-year-old Member of Wiper party has since then held a political influence, similar to that of his father.

Mutula has proved to be a promising young leader through his major contribution to the County Resource Allocation bill of 2020.

Then, he was among the ‘Team Kenya’ group which ensured equal resource allocation to counties using what they called the win-win formula.

At his age, it is only fair to conclude he will be around for quite sometime and be part of the young leaders shapping the country’s politics for years to come.

Having commended his success journey as a cobbler, Ndindi Nyoro has risen the country’s political limelight to become an influential leader i nationally and in Mt. Kenya.

The 35-year-old Kiharu rouble rouser holds no prisoners and he takes his challengers head on.

In Mt Kenya, he has not feared going against the grain and is among the few leaders who have paid the ultimate price for supporting William Ruto’s hustler narrative.

The former university student leader never hides his contempt for policies, issues or politicians he dislikes and his social media handle tells it all.

He rose to prominence through his passionate hatred for Raila Odinga, a position he has never changed much to date.

In 2017, he won by a landslide in his first attempt at elective politics and has maintained an illustrious public image since then.

Before his debut in politics, the Kimilili Member of Parliament served in the Kenya Airforce where he rose to the rank of a captain before leaving in unclear circumstances.

After a career in the forces, Barasa went to Australia where he became a manager for Shell Company. He would later on come back to Kenya two years before the 2017 election.
He contested for the Kimilili seat under the Jubilee Party, where he won by a huge margin.

An outspoken Didimus Barasa has since then shifted his political allegiance in support of the UDA party.

Currently, his next move is not predictable since he announced a four-month leave from politics. This announcement sent jitters in Ruto’s camp, with speculations that Barasa may decamp to Musalia Mudavadi’s ANC Party.

It is clear that his outspoken nature and development-led leadership in his constituency have endeared him to the electorate which means he will be around for quite a long time.