Uhuru to shake up senate leadership owing to poor performance 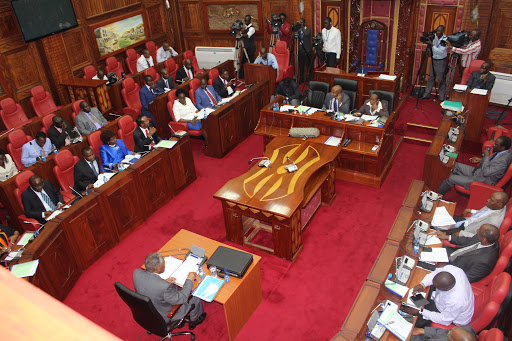 Afresh showdown looms in Jubilee Party as President Uhuru Kenyatta trains his gunsights on the senate leadership in the new reshuffle. Photo: Parliament/Twitter.

Afresh showdown looms in Jubilee Party as President Uhuru Kenyatta trains his gunsights on the senate leadership in the new reshuffle.

An insider who sought anonymity said that the Head of State, who has had a strained relationship with some of the leaders in the senate is keen to stamp his authority and chose a reliable team that won’t be easily compromised by the opponents.

“The current leadership positions are inevitable,” the source said.

Kivumbi.co.ke has established that the likely casualties in the new alignment would heads of committees and other departmental.

Jubilee this is after the Jubilee party recently questioned the loyalty of its members to the Party where several players have been termed as moles for the Tangatanga faction.

The reason for reshuffle has been termed as inefficiency and lack of strong leadership that is required to push the government agenda in the senate particularly the BBI.