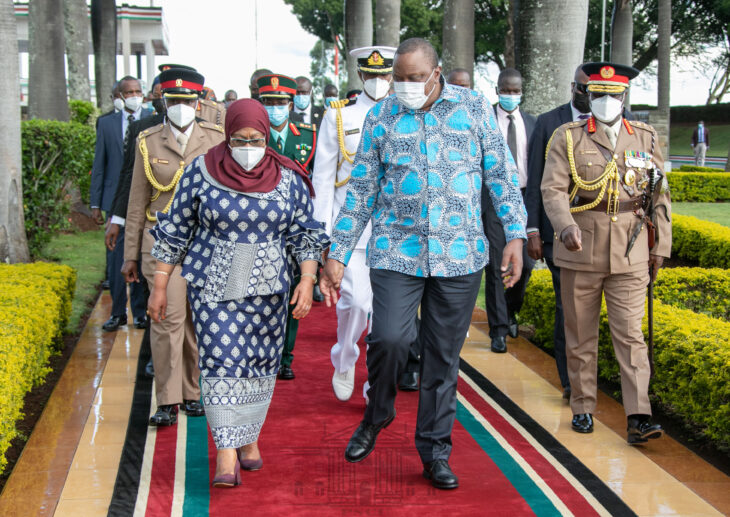 The president wore different clothes when she arrived at Jomo Kenyatta International Airport, when she went to meet President Uhuru Kenyatta and during state dinner. Photo: State House/Twitter.

The visit, which according to her is the first official trip outside Tanzania since becoming the president despite visiting Uganda in April, has been termed successful by both countries.

President Samia Suluhu, and her host Uhuru Kenyatta, agreed to work closely to strengthen trade and cooperation between Kenya and Tanzania.

Observant Kenyans noticed that she changed her clothes three times on her first day of the state visit. The president wore different clothes when she arrived at Jomo Kenyatta International Airport when she went to meet President Uhuru Kenyatta and during state dinner.

Other than just dressing elegantly for the occasions, President Samia Suluhu’s handlers carefully picked the colours.

At no point did she put on her red headscarf which she is frequently seen in when in Tanzania.

During her swearing in as president following the death of her predecessor John Magufuli. She wore it for her official presidential portrait and also during her first address to the Tanzanian parliament.

According to report by Katerina V. Malshina, colour symbolism – which permeates ancient mythology throughout the history of human civilization – facilitates a complex of cultural and semantic systems which play a vital role in the organization and administration of social relations.

President Samia Suluhu consciously avoided the red headscarf (which is inequivalent of a red neck tie for men) because of it significance.

The colour signifies authority. Being a guest in Kenya, it can be deduced that she subtly communicated to her host – President Uhuru Kenyatta – that she was not in Nairobi to challenge his authority. That there is only one president of Kenya.

The symbolism of colour red caused a stir in Tanzania when the Speaker of Parliament Speaker John Ngugai barred MPs from wearing red ties during the president’s address.

Speaker Ngugai said red colour symbolizes authority and only President Samia Suluhu had the said authority in the country. And as expected, she showed up in her red headscarf.

For her address in the Kenya Parliament, the president chose a brown head scarf.

Colour brown in psychology signifies a sense of strength, reliability, resilience, dependability, security, and safety. To Kenyan MPs, she probably wanted to pass a message that she is a reliable and a dependable neighbour.

President Suluhu could have also picked the colour to relay her personality. Brown is also associated with warmth, comfort, sense of being down-to-earth; qualities that many see in her.