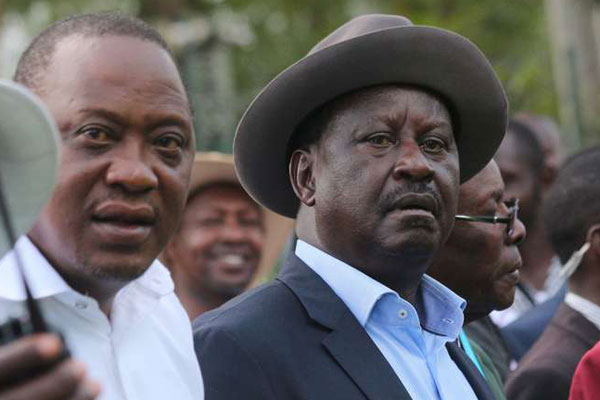 Raila Odinga and Uhuru's kins were appointed by CSs for health and Tourism. Photo: Standard.

President Uhuru Kenyatta and ODM leader Raila Odinga have been sent back to the drawing board after the BBI bill was declared unconstitutional.

On May 13, five high court judges ruled that the president, government or any state organ cannot initiate a popular initiative to amend the Constitution.

The bench also cited that the attempt to form new constituencies through the bill is beyond a BBI report.

In the ruling, the court said that it is not only the bill that is illegal but also the BBI Steering Committee which was chaired by the late Senator Yusuf Haji.

The bench comprised of Judges Prof Joel Ngugi, George Odunga, Jairus Ngaah, Teresia Matheka and Chacha Mwita said that parliament is the only organ with the power to initiate constitutional amendment.

Contrary to the proponent’s argument that the initiative will unite the country, the bench said that it will achieve the opposite.

They said that divisions would emerge since the bill is being fronted by an individual, President Uhuru.

This ruling comes just after both the National Assembly and the Senate overwhelmingly voted to pass the amendment bill.

It was now headed for a referendum after passing through the two houses and also the 47 County Assemblies.

This will now be a U-turn for the bill and as Kenyans would say; Reggae has been paused.