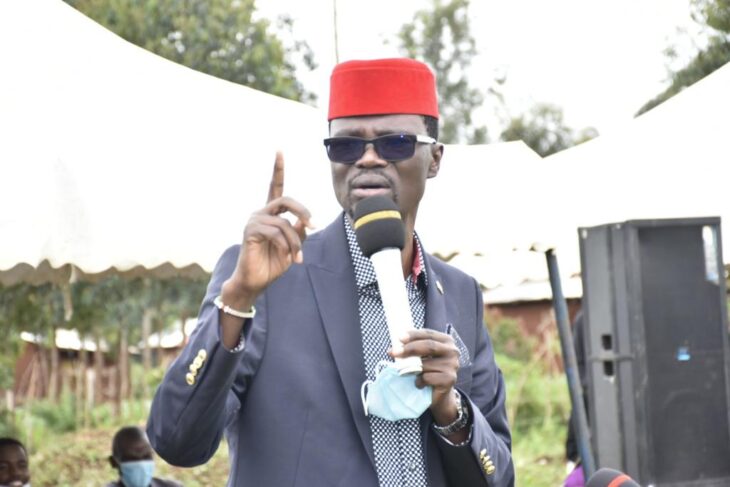 According to mourners, the drama started when Barasa a strong ally to Kenya’s Deputy president William Ruto was criticising Wangamati’s administration of underperformance. Photo: Didmus Barasa/Twitter.

Barasa, who has been condemning Wangamati’s style of leadership, while addressing the mourners accused the county boss of not initiating even a single project in Kimilili Constituency.

“The worst mistake Bungoma made was electing Wycliffe Wangamati as the governor. The man is a total failure,” Barasa told mourners.

It is at this juncture that Wangamati’s bodyguard Hassan Karim walked to the podium, snatched the microphone from Barasa and tried to strangle the legislator.

“Don’t kill him. Leave that man alone because he seems to be under the influence of something illegal,” Barasa who had been handed back the microphone pleaded with angry mourners.

After failed appeal to mourners to spare the man, the Jubilee MP threw the microphone and walked to the crowd where he took Karim by the hand and locked him in his vehicle.

Barasa who was speaking during the funeral of Oripha Wasilwa also took on a section of mourners allied to Wangamati who were booing him as he took on Wangamai’s regime.

According to Barasa, Bungoma County has been receiving to a tune of KSh 12 billion annually in the last three years but the Western county can only boast of building a few ECDE centers.

The governor was not present at the funeral.