Jubilee insiders who let party down in just ended by-elections 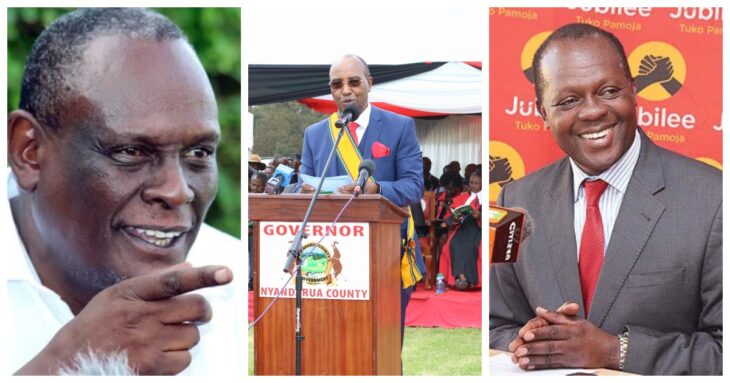 A day after the ruling party, Jubilee lost in all the three recently held by-elections, proponents of President Uhuru Kenyatta have been blamed for the poor results.

After the party lost in the Bonchari, Juja parliamentary and Rurii Ward by-elections that saw Ruto’s UDA and Raila’s ODM dominate the wins, fingers are being pointed at those believed to be responsible for the poor show.

Kivumbi.co.ke has compiled a list of Jubilee leaders thought to be responsible for embarrassing President Uhuru Kenyatta by recording poor results even in his own home county, Kiambu.

This is after Jubilee had tasked the county boss with ensuring the party retains the seat.

According to Simon Kanyingi, a seasoned politician in Nyandarua county, voters in Rurii ward lost confidence in Kimemia and his team long time ago following Kimemia’s empty promises.

“Jubilee can not send governor Francis Kimemia to make more empty promises to Rurii people yet he has not fulfilled the old promises he made to them and expect to get votes,” Kanyingi said.

Tensions in the Jubilee camp in the Juja constituency of Kiambu County have emerged as the main reason for the party’s failure to scoop the recently held by-elections.

This was after George Koimburi of the Peoples’ Empowerment Party was declared the Member of Parliament elect after he garnered 12, 159 votes beating Jubilee’s Susan Waititu who got 5,746 votes.

It is suspected that the tension started when the county boss was handpicked to lead the campaigning team, a move that was not welcomed by a majority of Jubilee leaders on the ground.

The IEBC accused Nyoro of hooliganism during the electoral process where the electoral agency was forced to suspend tallying of votes for more than six hours.

Jubilee party Secretary-general Raphael Tuju has not been spared either following the defeat in three by-elections that were held on Tuesday, May 18.

According to lawyer Ahmednasir Abdullahi Raphael Tuju and the party’sis among the party leaders to blame for the Party’s huge loss.

“Thanks to Vice Chairman David Murathe and Secretary General (Raphael) Tuju, my beloved Jubilee is officially dead. The cremation of the body is at Juja and thereafter the ashes will be thrown into the Chania River,” he said in a tweet.

It is believed that Tuju handed nominations to weak candidates especially in Juja and Rurii ward by-elections.

Tuju is accused of handing nomination certificate to Susan Waititu when he clearly knew that Geroge Koimburi was the strongest.

After Koimburi, a former strong ally to President Uhuru Kenyatta was denied the chance in Jubilee, he quickly defected to Moses Kuria’s PEP where he easily won the seat with a landslide.

According to political pundits, Murathe and Tuju colluded in handing nominations to weak candidates especially in Juja and Rurii ward by-elections.

Murathe was even on record underestimating PEP leader Moses Kuria and dared him to field a candidate in Juja by-election only for the candidate to beat Jubilee.

The arrogance displayed by Murathe during TV debates is said to have blinded the current Jubilee party leadership making it lose touch with the grassroots hence failing to get it right in crucial campaigns.