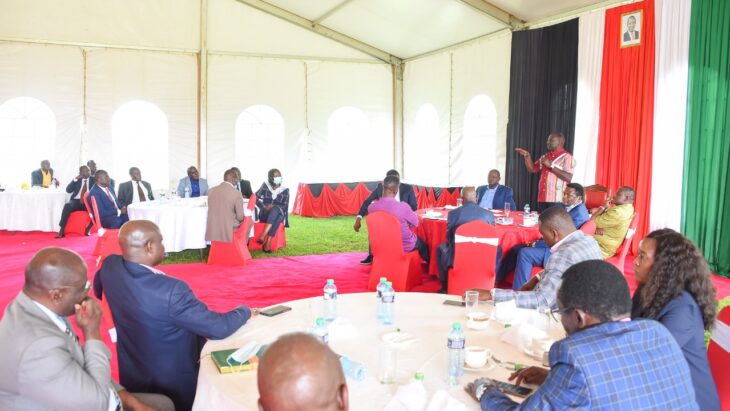 On Thursday, May 20, the presidential hopeful held a meeting with political, business and professional leaders from the counties of Busia, Bungoma and Kakamega. Photo: William Ruto/Twitter.

In what is becoming a familiar scene, Ruto on Thursday, May 20 held a meeting with political, business, and professional leaders from the counties of Busia, Bungoma, and Kakamega as part of his new campaign model to keep his 2022 campaign momentum on.

Prior to the ban on political rallies by President Uhuru Kenyatta, Ruto was arguably the most active politician traversing every corner of Kenya selling his hustler-focused political narrative.

Kivumbi.co.ke understands this meeting comes hot on the heels of a similar one with leaders from the Coast region, Nyanza as well as the Mt Kenya region.

The meeting that was held at Ruto’s official residence was also attended by economic specialists and professional experts as well as religious leaders.

“Held consultations with political, business, and professional leaders from Busia, Bungoma, and Kakamega counties to develop a framework of economic engagement that will form the basis of an accountable agreement ahead of next year’s General Election,” Ruto said in a statement after the meeting.

The meeting comes barely a week after the former Eldoret North Member of Parliament went for Raila’s rebels in Luo Nyanza over similar agenda.

Prior to this, Ruto who has been heavily linked to UDA party had held several meetings with political leaders from the Central region.

The leaders presented Ruto with an economic framework they believed if implemented will uplift the economy of central Kenya.

They further assured him that they will support his presidential ambition should he pick a running mate from the region.

Ruto is the only notebale politician wh has declared he will vie or the presiedency in 2022.

He has hinted he would be seeking the high office on a UDA party ticket considering he has fallen out of favour with top management in Jubilee party, a party he played an intergral part in creating prior to 2017 General Election.

on Wednesday, May 19, the second in command hosted former MCAs from Kajiado county where they discussed the bottom-up economic model.