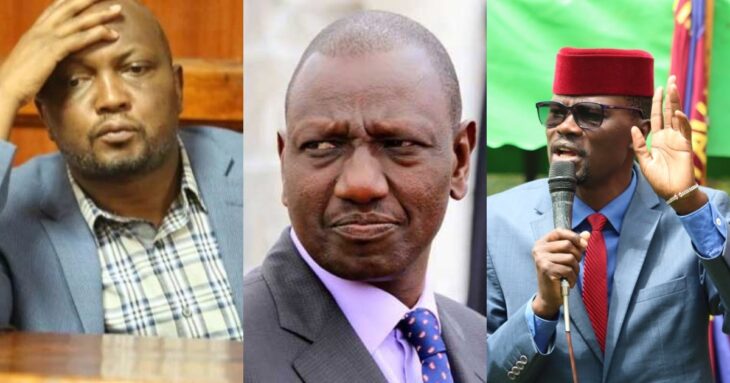 Confirmed reports have revealed of a supremacy battle within Ruto’s camp in the regions of Rift valley, Western and Mt. Kenya region perceived to be Ruto’s strongholds.

Confirmed reports have revealed a supremacy battle within Ruto’s camp in the regions of Rift valley, Western, and Mt. Kenya, all perceived to be Ruto’s strongholds.

It is reported that the duo who are eying for the top county job have each opened their own UDA office.

The trio now wants Kuria, to disband his People’s Empowerment Party (PEP) and join Ruto’s UDA arguing that UDA was the only hustler party in the region.

This is after Kuria’s PEP announced plans to field candidates against Ruto’s UDA in the Muguga and Kiambaa by-elections.

According to Rigathi Gachagua, Kuria who is an ardent supporter of Ruto has to fully support and join the UDA movement.

It is believed that the disputes within the hustler camp begun a long time ago and are suspected to have been the cause of some legislator defecting from Ruto.

While admitting to the internal wrangles within UDA, Ruto’s allies said they are working to ensure the camp remains intact ahead of the much-awaited 2022 General Election.

“We must work on a plan to manage these defections,” said Mumias MP Benjamin Washali.

Ruto held a meeting with his key allies from the Western region on Thursday last week where the presidential hopeful reportedly raised concerns regarding the internal disputes as well as the speed at which his camp was losing soldiers to other rivalry parties.