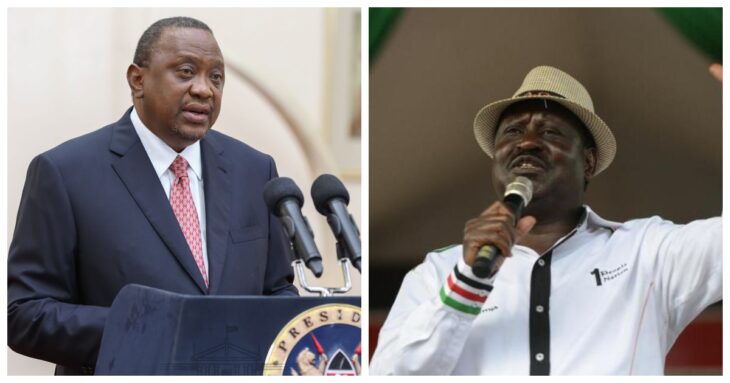 If you have two candidates at the rate of 50/50 and the deep state supports one, then you can be sure that candidate will win.

Political analyst Martin Andati has pocked holes in Uhuru and Raila’s bromance suggesting the ODM leader is just being kept busy from distracting the government like before.

According to him, the roles Uhuru has delegated to his handshake partner are purely for public relations seeking to keep Raila from criticising government like he used to before the handshake.

“By the time they finish, we’ll be in September or October and the ODM leader will not be able to cause any trouble,” Andati said in an opinion article published byThe Star newspaper.

Andati further questioned why Uhuru has not taken Raila Odinga to his Mt. Kenya backyard but instead Raila goes to central with nominated MP Maina Kamanda and former Gatanga legislator Peter Kenneth.

His comments come at a time when it is suspected President Uhuru’s move to delegate some state affairs to Raila Odinga is part of a wider scheme to groom Raila to succeed him in 2022.

Some of the delegated affairs Uhuru assigned to Raila include receiving high profile visitors on his behalf, launching national government projects among others.

Uhuru for instance sent Raila to receive Burundian President Evariste Ndayishimiye at the Kisumu International Airport ahead of the Madaraka day celebrations.

Ndayishimiye who was accompanied by First Lady Angeline Ndayubaha was to be the guest of honor at the Madaraka Day celebrations.

However, a section of leaders have argued that Uhuru could be using Raila for his own gains which include running the government smoothly.

According to Laikipia Woman Representative Cate Waruguru, Uhuru could dump Raila before the 2022 General Election.

She argues that representative of President Uhuru Kenyatta and DP William Ruto are secretly working on a truce.

Uhuru last year announced that his 2022 choice will surprise many.