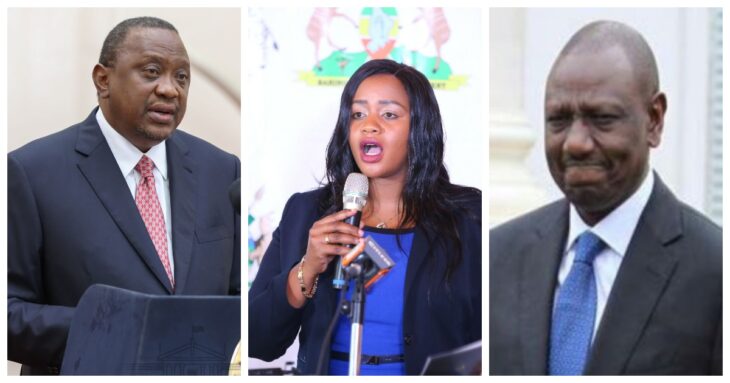 Laikipia County Woman Representative Cate Waruguru has opined that President Uhuru Kenyatta and his deputy William Ruto could reunite before the 2022 General Election.

Waruguru argues that there are ongoing secret talks between the representatives of the president and his deputy which could see the two leaders get back to their previous relationship witnessed between 2013 and early 2018.

“Some works are going on behind the scenes. People should wait for surprises. There is a truce that is likely to happen between President Uhuru and his Deputy William Ruto,” she said.

In an interview with Tuko.co.ke aired on Monday, May 31, the legislator said President Uhuru Kenyatta would do everything in his power to ensure that he leaves the country united.

Waruguru, who has denied allegations that she is a husband snatcher assured that if the truce between Uhuru and Ruto happens, then some leaders will have to be collateral (damage).

“Once that happens, there are politicians who will be casualties and others will be collateral damage of that truce,” she said.

Kivumbi.co.ke understands that Uhuru and Ruto no logger enjoy the envious close ties they had between 2012 to early 2018 before the famous handshake between Uhuru and Raila Odinga

Last week, NARC Kenya Party leader Martha Karua challenged Uhuru and Ruto to resign if they were unable to bury their hatchet and work together.

The call seemed to have only touched Ruto who later extended an olive branch to his boss requesting him for a dialogue to cool the current political temperatures in the country.

The head of the state however speaking shortly after Ruto during the National Prayer Breakfast held at Parliament buildings on Thursday, appeared to snub Ruto’s request for a dialogue.