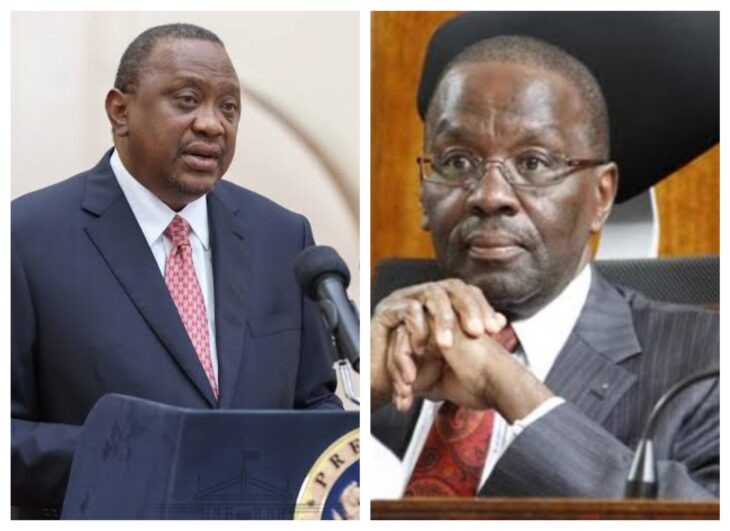 According to Mutunga, Uhuru also fears a potential presidency of DP William Ruto.

Former Chief Justice Willy Mutunga has weighed in on Uhuru’s constant tug of war with the judiciary, saying he should be impeached for his constant violation of the constitution.

In an intensive interview with the International Crisis Group, Mutunga argued that Uhuru’s disregard for court orders should be acted upon as it is similar to throwing away the constitution he swoe to protect.

“In my view as a lawyer, he (Uhuru) has subverted the Constitution in so many cases that he should be impeached,

“There are all these cases where the courts have ruled and he has refused to obey. Disobedience of the court is tantamount to overthrowing the Constitution. It’s a very, very serious issue,” Willy Mutunga said.

He accussed the president of constantly sending threats to the Judiciary.

The Kenyan Judiciary, he said, is divided between upholding the constitution and heeding to the demands of the executive.

According to Mutunga, Uhuru also fears a potential presidency of DP William Ruto.

On matters BBI, Mutunga argued that the process may lead to a chaotic 2022 General Election.

“What I see, even if they [pro-BBI group] win in those courts, what I see is that there is going to be serious, serious resistance that is already building against a referendum and against what people are afraid would be very dangerous 2022 elections,

“You can see quite clearly that we are headed to very, very serious instability political instability.” Mutunga’s sentiments come at a time when President Uhuru has been put on the spot for constantly disobeying court orders.

One court order that Uhuru defied openly is the ban on the millitarisation of the Kenya Meat Commission.

Justice Anthony Mrima ruled against the transfer of KMC from the Ministry of Agriculture to that of Defence.

In the June 3, appointment of Judges recommended to him by the Judicial Service Commission, Uhuru also acted unconstitutionally.

He dismissed 6 out of 40 judges that had been presented by the Judiciary Service Commission. This is contrary to the legal requirement to appoint all the 40 Judges presented by JSC.

Maraga had ordered the president to dissolve parliament because it is not properly constituted.

He said parliament failed to adhere to the 2/3 gender rule.

When Maraga left office, he accused Uhuru of deliberately disregarding court orders and settling scores with the judiciary.

When the former CJ nullified the 2017 presidential election after Uhuru’s win, the Jubilee party leader promised to “revisit” and truly, Uhuru is revisiting through his constant fight with the judiciary.