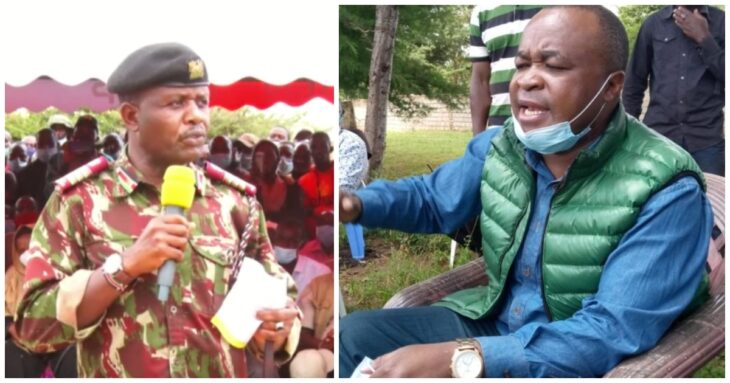 Even though the Rift Valley Regional Commissioner has not officially announced his bid, reports indicate that he will be contesting the gubernatorial seat, the same seat Wamalwa has openly declared interest in.

This has angered the Kiminini MP, who accused Natembeya of using government projects to gain political mileage.

“Remove your uniform and face me in the gubernatorial race or I personally remove them,” Wamalwa told Natembeya in a press conference at Milimani.

Natembeya has been launching the projects in the company of Devolution CS, Eugene Wamalwa, who is also a possible contestant for the seat.

A tree planting exercise in the county officiated by Natembeya and Eugene Wamalwa angered Chris Wamalwa who said he can floor both contestants come 2022.

“I have enough experience to give the two a heart attack if they vied. Why are they waiting for me to get out of the country before they launch these projects,” posed Chris Wamalwa.

Last month, Natembeya addressed a crowd at Kiminini market, where he was asked to declare his gubernatorial ambitions publicly.

Natembeya neither accepted nor denied that he will be on the ballot, which seemed to confirm the reports he is eyeing the seat.

He told the residents that he was on official duty, and would address the issue at a later time.

The Regional Commissioner has been moving across the county, not only launching projects, but also challenging Khaemba’s administration.

At one time he was caught on video addressing residents telling them they need leaders who can approach the president or cabinet secretaries and lobby for development projects not leaders who shout and make noise at funerals insulting other leaders.

On the other hand, Eugene Wamalwa is considered as a powerful prospect to succeed Khaemba. This is influenced by his family name and the fact that he once served as Saboti MP.

In 2017, Wamalwa was seen as a possible opponent for the current govern, Khaemba, but he shelved his political ambitions to focus on his state job.

As a for Chris Wamalwa, he is positioning himself on William Ruto’s side hoping to clinch the seat using the ‘hustlers’ tag.

Having been elected on a Ford Kenya ticket, Wamalwa fell out with the NASA brigade and joined Ruto’s Tanga Tanga camp.

Commissioner George Natembeya declares he will be vying for governorship