Opinion: Raila Odinga’s silence on Uhuru’s raw with the judiciary is too loud 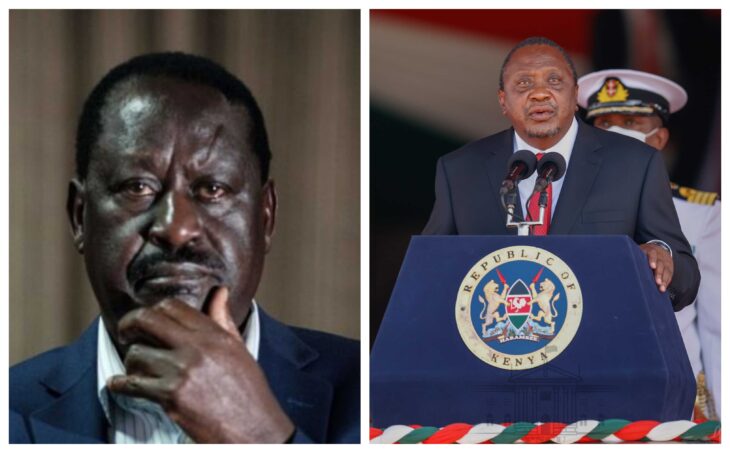 As the clock ticks towards the 2022 General Election, Kenya’s President Uhuru Kenyatta has said he will not dictate to Kenyans who they will vote for as their next president.

Where is Raila Odinga as his handshake brother fights off claims he has no respect for the constitution and the Judiciary? Is he still the official opposition leader in Kenya?

As Uhuru takes the bullets from key lawyers and politicians over the appointment of the 34 out of 41 judges recommended by the Judicial Service Commission, Raila Odinga has uncharacteristically remained mum.

Since the 2018 handshake, the two leaders have been reading from the same script most of the times.

It is expected that Raila Odinga would defend Uhuru’s actions, or rather ask for a dialogue between the judiciary and executive.

Early this month, the two leaders were in Nyanza region launching projects ahead of the June 1 Madaraka Day.

Several concerns were raised on why Uhuru launched several projects in Nyanza, leaving out neighboring regions.

In his words, President Uhuru said that Nyanza was receiving the privilege because of his close relationship with Raila Odinga.

On June 8, Raila, through his spokesperson Dennis Onyango cautioned politicians against portraying the Madaraka Day event as a favour to Nyanza.

“Odinga finds such talk retrogressive, divisive, dishonest and against the spirit of building one prosperous nation out of its diverse nationalities and regions,” Raila said in a statement

Raila’s statement came at a time when Uhuru’s war with the judiciary was at its peak, but he avoided the subject. Why is the once – very combative leader playing safe at a time like this?

The former Prime Miniser’s opinion on the relationship between Uhuru and the judiciary and claims he has no regard for the rule of law is no doubt something many analyst and Kenyans at large would love to hear.

Through the handshake, the ODM leader’s opposition voice has been so limited unlike before where he would be counted on to criticise the government of the day without any fear.

When Uhuru declined to appoint the 6 judges as recommended by Judicial Service Commission hence opening a battle front with section of lawyers and ex-judiciary leaders, some of Raila’s supporters called on him to quit the handshake to avoid tainting his image.

It does not help matters that even lawyers who are Raila’s political allies criticised Uhuru for the move led by Rarieda MP Otiende Amollo.

Political analyst Makau Mutua argued that Raila should separate himself from the ‘ill-mannered’ Uhuru.

What is Raila Odinga’s stand on Uhuru’s push and pull with the judiciary? Does he support his alleged disregard for the constitution or not.

Forget the fact he is Uhuru’s handshake brother, what about the fact Raila is the leader. of the official opposition party? Would it not be proper for him to stand up and give his voice?

EDITOR’S NOTE: The writer is Ayub Simiyu, a commentator on social and political issues. The opinions expressed in this article are those of his and do not necessarily represent those of Kivumbi.co.ke.

If you wish to have your opinion heard, send it to news@kivumbi.co.ke and it shall be considered for publication.