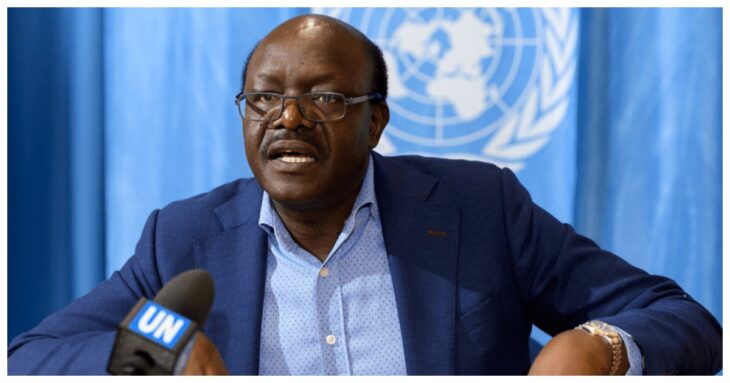 the presidential hope was caught without any form of cloth, in what appeared to be a form of blackmail. Photo: Courtesy.

The video which, shows the politician’s complete without any form of clothing from head to toe, is beleived to have been leaked by a woman he was within a hotel room.

In what appears to be some form of blackmail, the lady pans her camera discreetly with the former Kimilili MP appearing to have dosed off, suggesting the lady intended to use the video against the politician at some point.

The video, which Kivumbi.co.ke has seen but cannot publish for ethical reasons, comes barely a week after the politician was accused of assaulting a woman in a Mombasa hotel.

According to an OB report file at Nyali Police station in Mombasa, the former Trade and Industrialisation minister is said to have physically assaulted Diana Opemi Lutta after she turned down his sexual advances.

“Assault report to the station by one Diana Opemi Lutta today the 22 May 2021, at around 0200 hours. She has been assaulted by a person well known to her within Tamarind Village, namely Mukhisa Kituyi whom she claims to be her boyfriend,” the report read in part.

Mukhisa resigned as the UNCTAD Secretary General early this year to focus in the presidential campaigns to succeed retiring President Uhuru Kenyatta.

Mukhisa Kituyi is married to Ling Kituyi with whom they met in Norway as the presidential hopeful pursued his masters degree in the European nation.

His wife is the Head of Staff Health and Wellbeing at the United Nation High Commission for Refugees, Switzerland.

He is a father to three surviving children; Iva Makari, Sitati Kituyi, and Laila Mayilila. He lost his other son to a heart attack in 2015 at the age of 30.