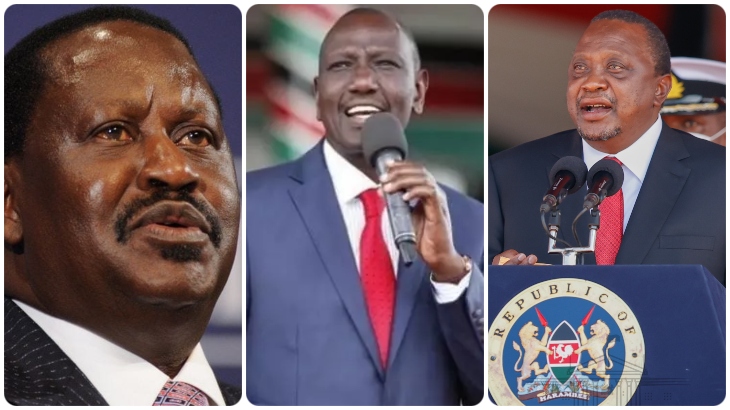 Kenya’s political landscape has started to take shape as the country braces for another epic political showdown in the 2022 General Election.

New formations bringing together former political arch-rivals are coming up as cracks and rifts between erstwhile allies widen.

At the centre of these new developments is Deputy President William Ruto, a man who has made up his mind and shown the commitment to succeed President Uhuru Kenyatta in 2022. General Election.

For the last three years, Ruto has been traversing different parts of the country to lay the ground for his presidential bid and is now arguably the front runner in the quest to succeed Uhuru.

Interestingly, with only 13 months left to the next General Election, it is still unclear who will face off with the DP among Kenya’s political bigwigs.

Despite having vicious critics and political nemeses of the calibre of ODM leader Raila Odinga, Kalonzo Musyoka (Wiper), and Musalia Mudavadi (ANC), none of them has given a clear and strong indication that he will take on the Sugoi-born ‘hustler’.

Instead, the former opposition leaders-cum government sympathisers have been coalescing around the ruling Jubilee Party, all hoping for the president’s endorsement.

Although many political pundits argue Raila could emerge from the woods and take on the deputy president, his reluctance to toss the hat in the ring has left Ruto as the only towering figure in the race to succeed Uhuru.

Observers think that without the ODM leader; the second in command would have a field day in the August 2022 General Election.

“Kalonzo Musyoka, Musalia Mudavadi, Gideon Moi and (Moses) Wetangu’la cannot beat William Ruto even if Raila and Uhuru support them. It will be very difficult, the only man who can give Ruto a run for his money is Raila Odinga,” argued political analyst Herman Manyora.

We must unite ahead of 2022 General Election

During the burial ceremony of former Kibwezi MP Kalembe Ndile, Raila and Kalonzo hinted at working together to put Ruto’s State House ambitions at bay.

Their statements were preceded by a strong warning from Kitui Governor Charity Ngilu, who noted the DP would easily ascend to power if the two (Kalonzo and Raila) would not unite.

“If Kalonzo and Raila fail to unite ahead of 2022, then Ruto’s chances of success will be high. We must accept and work with Raila so that we beat Ruto [in the 2022 election],” she said.

“How will the Kamba community benefit if they choose to vote for Kalonzo and lose the presidency?” she posed.

A few days later, the Wiper leader led a delegation of Kamba leaders to State House, where it emerged president Uhuru Kenyatta promised to throw his weight behind one of the Opposition leaders (NASA principals).

The head of state reportedly asked Kalonzo to unite with Raila and other NASA principals, who include Mudavadi and FORD Kenya Party Leader Moses Wetangu’la.

“Steve (Stephen Kalonzo), listen to your people and what they are saying. Unite in NASA then we shall see what will happen. Whatever you will agree on is what I will go with,” the President said as quoted by The Star Newspaper.

Uhuru has evidently fallen out with Ruto and is looking for his preferred successor in the NASA camp, an alliance that almost scuttled his re-election in the  2017 General Election.

To unleash a political masterstroke against his defiant deputy, Uhuru has been linked to a number of political projects.

The head of state is reportedly behind the formation of One Kenya Alliance, a political movement comprising Mudavadi, Kalonzo, Wetangula, and Gideon Moi.

According to lawyer Kipchumba Karori, the new alliance, which is popularly referred to as the “cerelac” coalition as it is considered a coalition of weak politicians who hope to get political favours from Uhuru Kenyatta.

One Kenya Alliance was formed to lock William Ruto out of some regions perceived to be strongholds of the four principals.

The advocate also argued the alliance was part of a wider scheme by the “deep state” to deny the DP a potential running mate from either Western or Ukambani.

However, political analyst Javas Bigambo argued Kalonzo, Mudavadi, and Wetang’ula crafted the One Kenya Alliance to protest against Raila’s dominance and brinkmanship.

“One Kenya Alliance is a protest against Raila Odinga’s political manoeuvres which have become too complex and sophisticated for Kalonzo, Mudavadi and Wetangu’la to keep up with. Another dispute could be emanating from the sharing of political parties funds which ODM is reported to have taken everything and left its partners with nothing,” said Bigambo.

However, the alliance has been inactive for the past few months, and there are growing concerns if it will withstand the looming political turbulence and whirlwinds as 2022 draws near.

In what has also been seen as an elaborate plan to tame Ruto’s defiance and growing popularity under the Hustler Nation campaign, Raila’s ODM and Uhuru’s Jubilee Party are finalising negotiations that would see them work together in 2022.

Jubilee Party Secretary-General and his ODM counterpart Edwin Sifuna described the ongoing talks as part of the handshake conversation and a gesture of political goodwill from both sides.

“We (Jubilee) want to have active engagement with ODM as we head towards 2022 elections in terms of coming up with an alliance which is in the cards,” Tuju said.

Wiper and KANU signed a post-election cooperation partnership with the ruling party, and chances are high the two outfits might consider extending or inking another deal beyond 2022.

“Once Jubilee and ODM agree to work together, Kalonzo, Mudavadi and Wetang’ula have no option, they will have to follow because they can’t beat William Ruto on their own. For Gideon Moi, that I have said many times that he is a prince, he is part of Uhuru’s plan,” observed Manyora.

The Building Bridges Initiative (BBI) constitutional amendment bill 2020, is the brainchild of the president and the former premier.

Among a raft of recommended reforms, the BBI bill intends to expand the executive by introducing the prime minister’s office, two deputy prime ministers, and the office of the official opposition leader.

A section of political observers have argued the above recommendation (expanding the executive) could be another ploy by promoters of the bill to legalise a process that would allow them to form a strong coalition against Ruto and accommodate all major partners in government.

Despite the High Court declaring the process unconstitutional, promoters of the amendment bill have insisted it must happen before the next General Election.

COTU boss Francis Atwoli recently ruffled feathers when he suggested that 2022 polls should be postponed until BBI is passed.

“If there’s is no BBI we will postpone elections. It will not be the leaders.. it is us who got problems. No BBI no election and that I can tell you for free.”

Atwoli is a strong critic of Ruto and has severally predicted the DP’s downfall. He even once suggested the DP would not be on the ballot come 2022.

“I told you in 2022 I don’t know who is going to be the President of the Republic of Kenya but I know who will not be. That one I told you for free and I don’t want to keep on repeating myself and that person is William Ruto,” said the COTU boss during an interview with Citizen TV.

Ruto is the only senior politician who has publicly opposed BBI, a stand that has not only rubbed his boss the wrong way but has also seen all his competitors gang up against him.

“Najua wamenipangia maneno  hapa mbele. Nataka kuwaambia pia mimi sio kidogo. Wakue ready, pia nimejipanga (I know they have plans against my ambitions but they should know I am also ready and well organised)” said Ruto during a rally in Baringo in February 2021.