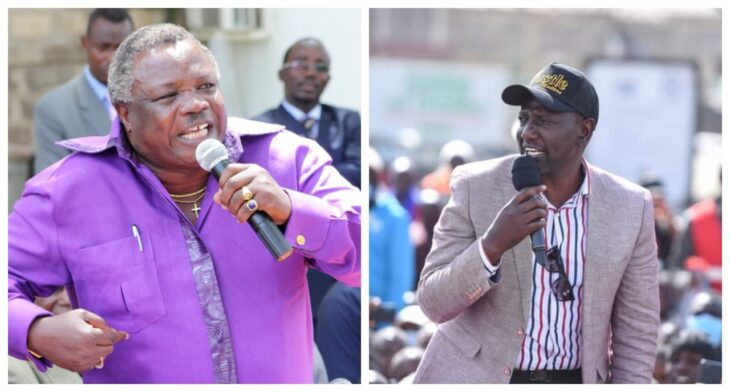 His sentiments come after DP William Ruto dismissed efforts to change the constitution through BBI.

Speaking to the press on Monday, Atwoli suggested William Ruto is a dangerous man to place at the helm of the nation.

He further warned the media against inviting the Deputy President for interviews.

“When I tell you so and so (Willaim Ruto) is not fit to be a president, you also come against me, you invite him on your TVs,” Atwoli possed.

The COTU boss said without mentioning said that if Ruto is elected the President, he will loot the country to the core.

“You know the person you are talking of can put the Central Bank of Kenya on his back and run away with it. This is the naked truth,” he said in his characteristic animated style.

Atwoli is known to be a strong critic of Ruto’s aggressive brand of politics. He has previously accused him of premature campaigns and not being clever enough to the extend of outsmarting his own boss Uhuru Kenyatta.

While Atwoli shows wavering support towards Raila Odinga, Gideon Moi and Musalia Mudavadi one thing he is committed to is making sure Ruto does not win.

In the same press conference, Atwoli said that talks on constitution changes through BBI began even before the handshake between President Uhuru and Raila Odinga.

“Our 2010 constitution needs to re-examine it, there is a proposal for Kenyan workers. In 2017 during labour day, we proposed that we need to revisit the constitution,” Francis Atwoli said.

His sentiments came after DP William Ruto dismissed efforts to change the constitution through BBI.

Speaking in an in-depth interview on KTN News, Ruto said the proponents of BBI only aim at creating positions for themselves.

He advocated for the bottom-up economic approach, calling for the empowerment of the common/ordinary Kenya as opposed to the current model where the wealthy stand a higher chance of benefiting.