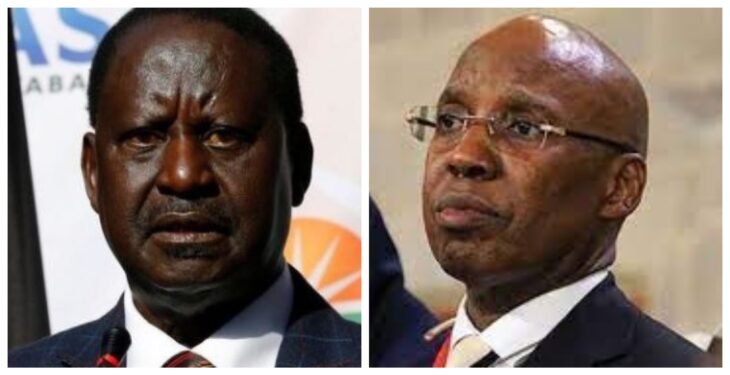 The prediction on Jimi Wanjigi and Raila Odinga is a matter to watch since both of them have interests in contesting for the presidency under the ODM ticket.

There is a looming showdown in the ODM Party after billionaire businessman Jimmy Wanjigi threw his hat in the ring where he will seek the party’s presidential ticket ahead of 2022 General Election.

Jimmy Wanjigi, who has been a big supporter of Raila Odinga and a financier of his campaigns is now ready to take the bull by the horns.

Speaking to the Daily Nation newspaper, Wanjigi confidently stated; “I will be in the race, (for 2022 presidential race)”

Being a life member of the ODM Party, insiders say that Wanjigi is not planning to shift allegiance, and if his word is to go by, he will contest for ODM’s presidential ticket.

Armed with his KSh 1 Million, Jimmy Wanjigi will apply for the Presidential nomination ticket for the ODM Party.

Due to his financial muscle, the businessman will definitely disrupt the 2022 Presidency race in which only William Ruto, Mukhisa Kituyi and Amani Nationa Congress leader Musalia Mudavadi have declared an interest.

Currently, ODM leader Raila Odinga has not declared his intentions to contest for the top seat but his close allies have repeatedly said he will vie.

As on April 1, 2021, Raila Odinga had not submitted his nomination papers to the party for purposes of vetting, neither had he paid the requisite KSh 1 Million nomination fee.

As Jimmy Wanjigi tosses himself in the race, he is going to spoil the party for not only Raila Odinga (who allies believe will vie for the presidency), but also Mombasa Governor Hassan Joho and his Kakamega counterpart, Wycliffe Oparanya who have declared they will be seeking the party’s presidential ticket.

“My supporters know me. When I decide to go for something I mean it. I cannot lose hope. I have assessed myself and come to conclude I can be the president of this country,” Joho insists.

On Oparanya’s part, his desire is highly dependent on whether Raila Odinga will give him the final blessings.

“If my party leader stands, I think I would rather go for another post instead of opposing him because we have worked together all this time since I joined the party in 2005,” Oparanya argues.

ODM worried about Jimmy Wanjigi’s bad intentions at the party