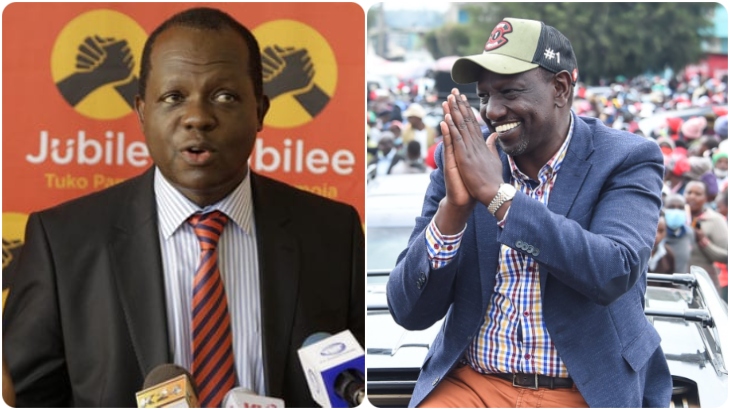 Jubilee Party has faulted Deputy President William Ruto’s wealth and how he acquired it within a short time.

Jubilee Party Secretary General Raphael Tuju has challenged Deputy President William Ruto’s loyalists who are still in the party to quit instead of complaining.

Tuju on Wednesday, June 30, said those opposing planed Jubilee-ODM merger are Ruto’s sympathizers and urged them to leave the party saying there is no need for them to remain in a party that they do not trust in its leadership.

While defending the planned coalition between Jubilee and Raila’s ODM, Raphael Tuju said that the ruling outfit was seeking to bring on board other tribes since the handshake between Ruto and Uhuru only brought together two tribes.

“The president has decided to reach out to other leaders to bring about full unity in the country. The main reason is that the first handshake between him and Ruto involved only the Kikuyu and Kalenjin communities,” Tuju said.

Some Jubilee party leaders have been blaming party’s leadership, including Raphael Tuju and David Murathe, of making decisions without consulting other party stakeholders.

Lawyer Ahmednassir recently claimed that both Tuju and Murathe have literally killed the once most progressive party.

This is believed to be the main reasons a section of leaders are switching their allegiance to rival outfit UDA, associated with William Ruto.

This saw President Uhuru’s confidant and Nyeri Town Member of Parliament Ngunjiri Wambugu warn that the party could lose more valuable players to Ruto if urgent measure were not instituted.

Yesterday, Kivumbi.co.ke reported that the Ruto’s camp had launched a vigorous campaign to snatch some of the most influential Mt Kenya grassroot leaders ahead of the much anticipated 2022 General Election.