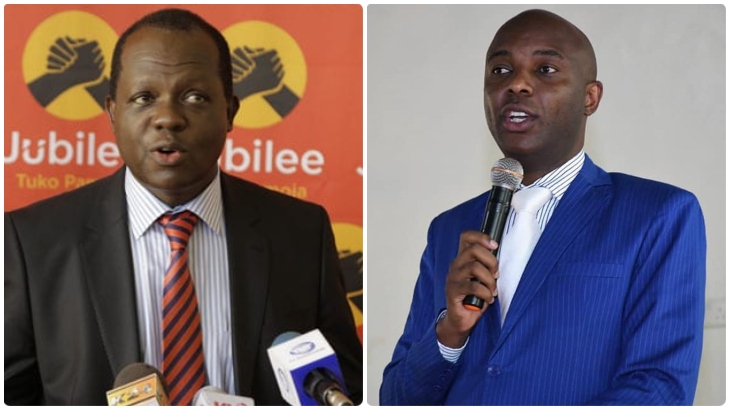 UDA party flag bearer for Kiambaa by-election urged the state to cease from interfering with the poll results.

Muranga Senator Irungu Kang’ata has sensetionally claimed Jubilee Party, has planned to rig the upcoming Kiambaa by-election in which UDA is poised to face of with Jubilee party for the first time.

The accusations come barely days after a section of Jubilee MPs warned Kiambaa voters against the ‘Faceless’ UDA party which they claimed is using the constituency as an experiment ahead of the 2022 elections.

Kang’ata has called for independent external observers to monitor the upcoming by-election slated for July 15, to prevent interference by the state.

“I have no doubt that the government now wants to steal that election so we need to have very strong international observers,” Said Senator Irungu Kang’ata.

Kivumbi.co.ke could not independently verify whether or not indeed the senator has written the said letters.

On his part, UDA’s flag bearer for Kiambaa by-election urged the state to stop interfering with the planned mini poll.

“We are asking the government to allow Kiambaa people to exercise their democratic right, which is to elect the person that they want to be their member of parliament,” said UDA candidate John Njuguna.

Analyst have billed the Kimabaa contest to be the real test for the stenght of JUbilee party who influence in the country’s politics has been on a downward spiral.

The party, linked to Deputy President William Ruto, has been soliciting for votes from Kiambaa residents through direct interaction with the electorate in markets and shoping centers.

Jubilee Party officials also have their eyes set on the Kiambaa by-election, hoping that it will wipe their tears from the May 18 Juja by-elections where a candidate allied to UDA floored the Jubilee party candidate.

On July 1, KANU party leader Gideon Moi who was was recently listed among the most silent legislators visited Kiambaa to drum up support for Jubilee candidate Kariri Njama.

“We are here in solidarity with Jubilee candidate in Kiambaa and we are confident he will triumph in the upcoming mini-polls. We are counting on the support of the people of Kiambaa,” Gideon Moi said.

In his visit to Kiambaa, he held a meeting with Members of the County Assembly from Kiambu calling on them to facilitate the win of Jubilee.