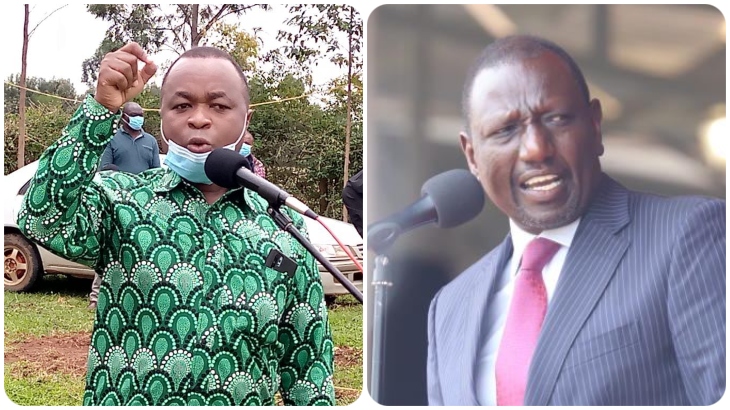 Kiminini MP Chris Wamalwa has predicted when Kenya’s Deputy President William Ruto could likely resign so as to contest for the presidency in the 2022 General Election.

Speaking to Citizen TV on Tuesday, July 6, the Ford Kenya MP said the deputy president will surely not remain in office and Jubilee party until the next General Election.

“I know there are a lot of people who are trying to push him (William Ruto) out … but if he resigns now, he will be in serious danger … I do not see him staying in Jubilee until the end of the term though; he may leave several months before the General Election,” Kiminini MP said.

Since the 2018 truce between President Uhuru Kenyatta and opposition leader Raila Odinga, the DP has been sidelined from the normal running of the government.

In an interview with Citizen TV, Ruto accused the President of inviting intruders into his government and who are humiliating him.

After Ruto admitted that he has been pushed aside, a section of leaders called for his resignation, likening his relationship with President Uhuru to a broken marriage.

“This is completely unconstitutional. The president has joined a bandwagon …It is a bad example. They can both resign and pave way for by-election because they were elected as unit hence must work as a unit,’’ Karua said.

Wiper leader Kalonzo Musyoka piled pressure for Ruto to resign saying the DP will earn a terrific political milage if resigns now especially when his relationship with Uhuru has deteriorated beyond repair.

“But if William Ruto wants to be a true democrat… the most honorable thing he can do is to resign… in fact, that will earn him a terrific milage … and Kenyans will remember him for that,” he added.

However, despite calls to quit, the DP has maintained that it will be the biggest act of betrayal if he were to walk away from the 8 million Kenyans who voted for him and President Uhuru.

“For William Ruto, I have chosen to make a different decision (from what Jaramogi Oginga Odinga did in 1966). I believe that I can still use the latitude given to this office to do more for Kenyans or other things for Kenyans,” Ruto said.