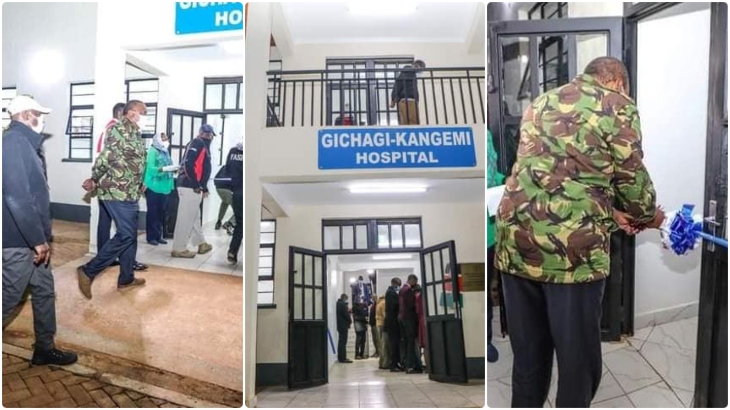 President Uhuru Kenyatta traversed the streets of Nairobi city on the night of Tuesday, July 6, where he commissioned five new hospitals and ordered them to offer 24 hour-services to city dwellers.

President Uhuru Kenyatta traversed different estates of Nairobi city on the night of Tuesday, July 6, where he commissioned five new hospitals and ordered them to offer 24 hour-services to city dwellers.

The hospitals launched by the Head of State in the four-hour night operation were two-level 2 hospitals at Gichagi, Kangemi and Gatina in Kawangware as well as level 3 hospitals in Mukuru Kwa Rueben, Tassia Kwa Ndege, and Our Lady of Nazareth in Mukuru Kwa Njenga.

The new health facilities are part of 24 such hospitals being constructed by Nairobi Metropolitan Service (NMS) as part of a broad Government plan to decongest Kenyatta National Hospital, Mama Lucy, Pumwani, and Mbagathi hospitals.

Speaking to journalists who accompanied him during the Nairobi city operation at State House, Nairobi after the exercise, the President said he chose to commission the new hospitals at night so as to adhere to Covid-19 containment protocols.

“We went at night because we wanted to ensure that we were observing Covid-19 protocols. As you have seen for yourselves, it would have been impossible to go and do what we did today, during the day because of the number of people who would have been out there,

“It would have been very difficult for us to do the job we wanted to do and at the same time observe Covid-19 protocols that the government has put in place,” he said.

Uhuru further said the operation was aimed at enabling him to assess the population of city residents, especially those in informal settlements where the hospitals are located, seeking healthcare at night so as to enable the Government to resource them adequately.

Besides opening the new health facilities, Uhuru said the night tour was aimed at inspecting the ongoing road construction projects within the informal settlements saying so far a total of 400kms had been completed while another 450kms were underway.

“The other thing we wanted to see was the roads. We embarked on a program where we are doing 400kms of roads in our inner cities. We have been able to travel in those informal settlements without challenges,

“These are roads we have been constructing over the past one year and we are now constructing 450kms and we want to increase the same with another 300kms in this financial year,” the President said.