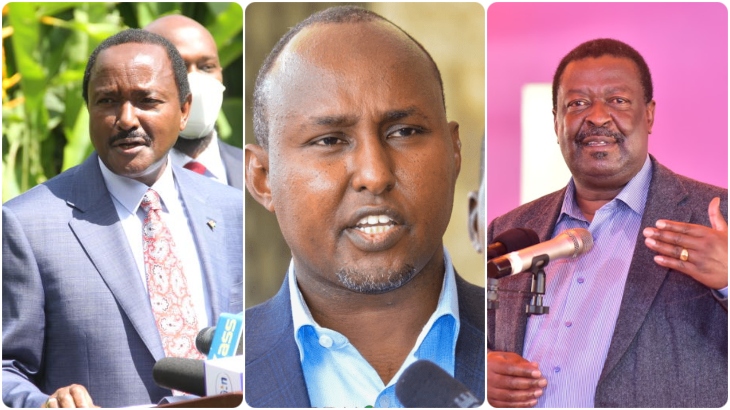 Raila Odinga’s ODM party has given tough conditions to Musalia Mudavadi (ANC) Kalonzo Musyoka (Wiper) and Moses Wetang’ula (FORD Kenya) for the revival of the coalition on which he vied for the presidency in the 2017 General Election.

The ODM party has told the trio that the only way Raila Odinga could support one of them is if they agree to undergo a joint presidential nomination exercise and one of them emerges the winner.

Raila Odinga’s ODM party said that the primaries to determine the winner will be overseen by the electoral commission, IEBC.

They gave the trio an option to choose whether the vote will be through election by members of the 3 parties or by delegates.

The Suna East MP noted that Raila Odinga’s ODM is not ready to support weak members, giving a hint that their party leader will be in the presidential race too.

On hearing ODM’s demands, Wiper Party’s Mutula Kilonzo noted that they can not be trusted, and could be having a sinister motive.

“All these processes are predicated on trust. As we speak, the parties cannot agree on sharing the political parties’ fund. How will they agree on a joint nomination?” Mutula Kilonzo wondered.

The NASA revival talks come as the Mudavadi, Wetangula, and Kalonzo trio also mulls at a coalition with Jubilee Party.

Jubilee party deputy secretary-general Joshua Kutuny on Tuesday, July 6, said that Jubilee prefers to form a coalition with NASA other than ODM alone.

“The much talked about the merger is not our immediate priority, we want to have a coalition with the entire opposition coalition of NASA, this will add more value with the ruling party rather than having ODM alone, it’s the entire coalition or nothing,” Kutuny said.