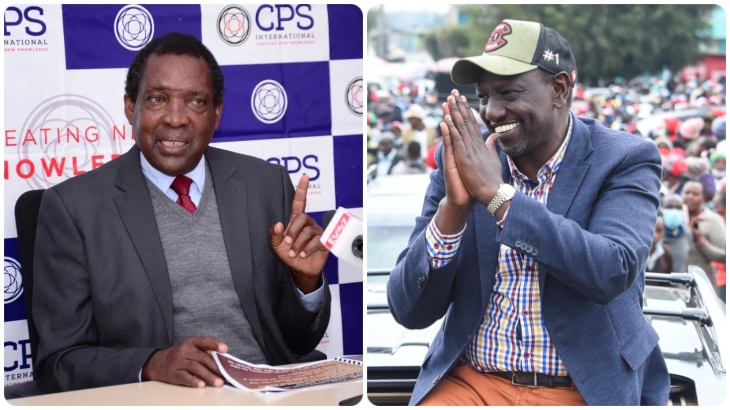 Political analyst Herman Manyora has observed that Deputy President William Ruto would become the president thanks to the many sympathy votes that would go his way.

In his weekly YouTube political analysis programme ‘A matter of time’, Manyora said if the elections are held now, Ruto would get sympathy votes including his.

“I have told these handshake people, Raila Odinga and President Uhuru Kenyatta. You keep giving Ruto sympathy votes. The way Ruto is being attacked, if elections were held today I would vote for him,” Manyora said.

Manyora echoed Machakos governor Alfred Mutua remarks that the move by Uhuru Kenyatta and Raila Odinga to join forces in opposing Ruto to the point of calling him a thief is scaling up his political profile.

Manyora argues that the recent remarks by presidential hopeful Raila Odinga to imprison the corrupt if he takes over power is a serious mistake that has reduced his votes significantly, paving way for Ruto to enter into power if elections are held now.

Last week, Rails said the first thing he will do should he ascend to power will be jailing all corrupt people in what appeared to be a direct target to DP Ruto.

But according to Manyora, people are making more progress including building mansions in Nairobi’s suburbs because they have stolen public money and thus ending corruption will see the majority of youths lose employment opportunities.

He says ending the country’s corruption will further scale down the country’s economic growth since a majority of youths will lose their jobs.

“Corruption is an industry. It is an enterprise. Let me tell you if someone becomes the fifth President and the following day there is no corruption, those clubs you see open, those buildings you see under construction will stop because all these money is from stealing,

“And if you stop stealing, you can put the country into a standstill for some time,” he explained.

Manyora, a scholar at the University of Nairobi argues that Raila should first calculate how he can win the presidency before he begins to fight the corrupt when in power.

“But fighting thieves directly the way Raila is doing, … they will gang up against him since a majority of them are very powerful government machines,” Manyora said.