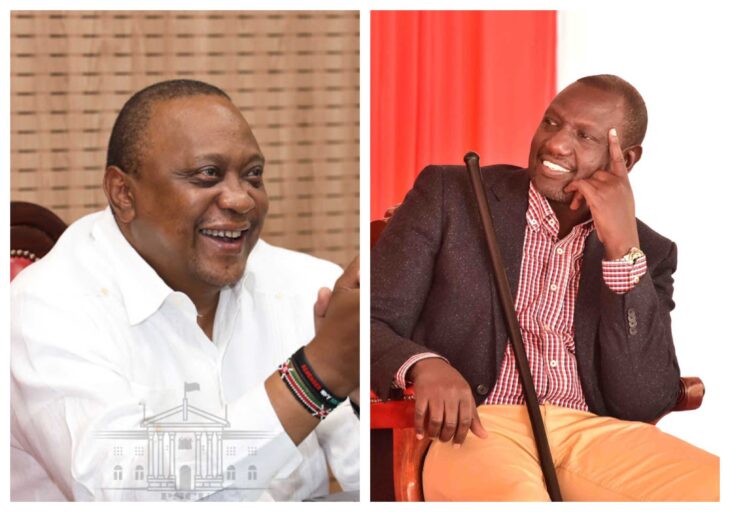 Uhuru’s indirect attack on DP Ruto comes after he faced similar criticism from his political opponents.

President Uhuru Kenyatta has taken an indirect swipe at his deputy William Ruto over his politics of giving out handouts.

Speaking during his tour of the Ukambani region, Uhuru covertly accused Ruto of corrupting the minds of the youth with handouts.

According to Uhuru instead of empowering youths to fend for themselves, Ruto is busy giving them money which will eventually not help them in the longrun.

“Kenyans don’t want handouts. They want to be given the ability to fend for themselves. That is the country we can say, have citizens who are happy for their country,

“You must have plans. And you can’t have plans if you don’t think about the things that will help citizens to stand on their own, ” he said.

Uhuru’s indirect attack on DP Ruto comes after he faced similar criticism from his political opponents.

Speaking in Mombasa on July 4, ODM leader Raila Odinga accused Ruto of giving the proceeds of corruption to the church as handouts.

He vowed to send the likes of Ruto to prison when he clichés the presidency.

“Where does he get the millions from? No one questions where this money is from. When we get into government, our first duty will be to jail all these people,” Raila said.

“Do not accept everything, and when it is brought to you, you should sanctify it. The church should be a blessed thing, not taking stolen money. You can bring condemnation,” Kalonzo said in a church function on July 5.