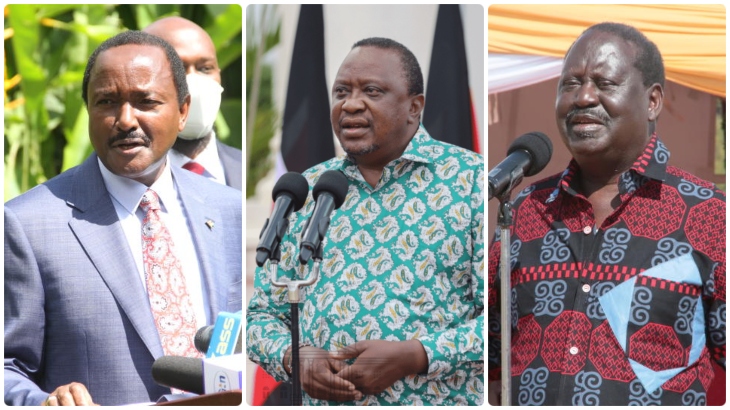 The unending feud between former Prime Minister Raila Odinga and Wiper party leader Kalonzo Musyoka played out in front of President Uhuru Kenyatta suggesting that the duo had ignored Uhuru’s plea for unity.

Wiper Party leader Kalonzo Musyoka admitted he did not expect Raila Odinga to accompany president Uhuru on his Ukambani trip at a time the two leaders are feuding over the fate of NASA coalition.

This comes barely days after the Head of State reportedly held talks with the two of them to ward off the ongoing rift between the two leaders.

As part of President Uhuru’s plea for unity, Uhuru secretly invited Raila to the Ukambani tour, a move that surprised not only Kalonzo Musyoka but even the other local leaders who did not expect the latter’s arrival.

The Wiper party leader spoke first where he trolled the ODM leader for crashing the party by joining Uhuru’s delegation when he did not accompany President Uhuru Kenyatta to Kisumu during the Madaraka Day commemoration.

“Thank you for coming. We did not expect you here but God has enabled you to come to Ukambani. We are one united team,” Kalonzo said.

When Raila’s term to address came, the 2022 presidential hopeful declined to address the gathering at Thwake Dam where President Uhuru had gone to inspect the construction of the KSh 42 billion project.

The two who have been embroiled in a public fight over Political Party’s fund and the 2022 presidential candidature are part of the divided NASA coalition which encompass ANC leader Musalia Mudavadi and Moses Wetang’ula of Ford Kenya.

She said that the Head of State is unhappy with leaders’ continued attacks as he hopes to unite them and extinguish his Deputy William Ruto’s dream of succeeding him.

“The president was concerned about their public attacks, which he observed were not good for the unity he desires for the country ahead of next year’s General Election,” she said.