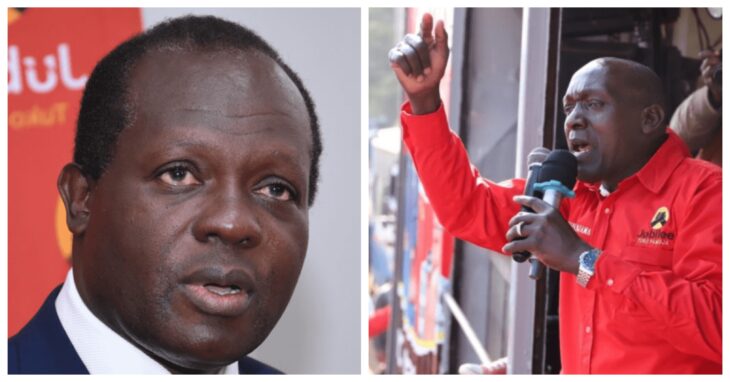 Jubilee Secretary-general Raphael Tuju dismissed the reports, claiming their opponents are responsible for the propaganda.

KiambaaDecides: The Jubilee  Party has dismissed claims that its candidate Kariri Njama has withdrawn from the titanic by-election set to define Uhuru and his deputy Ruto’s political influence in Mt Kenya.

On Wednesday night, reports went round on social media platforms, indicating that Njama had withdrawn from the race just hours before the July 15 polls kicked off.

In a press statement seen by Kivumbi. co.ke, Jubilee Secretary-general Raphael Tuju dismissed the reports, claiming their opponents are responsible for the propaganda.

“The Jubilee Party candidate Kariri Njama is very much on the ballot. Shame on those opponents that after sensing defeat have resorted to using an old, tried and primitive disinformation tactic used some time in the 1960s,” read part of the statement from Raphael Tuju.

The Jubilee SG also warned Kiambaa residents of plans by opponents in Tanga Tanga to fake arrests on the polling day for purposes of seeking sympathy.

“Kenyans should also be aware of another strategy of deceit in which some legislators are precipitating a situation of confrontation and make claims that they have been arrested so that they may try and inflame emotions..” Tuju said.

The Kiambaa polls kicked off at dawn, and the main horses in the race are Jubilee candidate Kariri Njama and UDA’s John Njuguna.

The by-election has posed as a litmus test for President Uhuru Kenyatta(Jubilee) and DP William Ruto(UDA).

According to political pundits, the outcome of the Kiambaa by-elections will be a measure of whom among the two is the most influential in the Mt. Kenya region.

This, they say, will also determine whether Uhuru will influence the 2022 presidential elections, or DP Ruto will have a field day there.

“Please note that your Kiambu Police Station arrested 3 young people yesterday over a non-existent crime as recorded on OB – allegations of election issues – Your officers say they will not produce them in court until Monday. 24-hour rule expires in an hour,” Dennis Itumbi, a supporter of UDA tweeted.