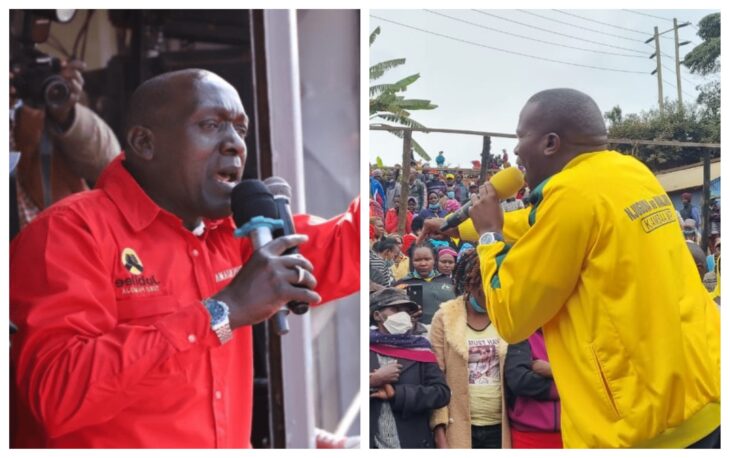 Jubilee candidate Kariri Njama has vowed to challenge the election of John Njuguna of UDA as the Member of Parliament elect in the just ended Kiambaa parliamentary by-election.

Jubilee supporters caused clashed with police and election officials in Kiambaa with less than 3 polling stations to go and UDA candidate in a very narrow lead.

The Vote counting at the constituency tallying was suspended indefinitely early Friday morning after Jubilee candidate Kariri Njama and his supporters alleged that the ballots are being rigged in favour of UDA candidate Njuguna Wanjiku.

Karuri high school was the only remaining polling station to be documented among the 154 centers in the constituency.

Speaking to the press, Jubilee candidate Kariri Njama asked for a recount of votes in 3 polling stations, saying he is confident of winning the election.

He demanded a vote recount in Mucatha, Kawaida, and Gachie polling stations, claiming that UDA candidate John Njuguna had rigged.

In 151 out of 154 polling stations UDA candidate John Njuguna Wanjiku is leading with 21,227 votes and is closely followed by Njama Kariri who has 20,818 votes.

This is according to provisional results provided by Independent Electoral and Boundaries Commission (IEBC).

Elsewhere, the IEBC has declared Jubilee’s Joseph Githinji as the winner of Muguga ward by-elections held on July 15.

The Kiambaa by-election had been billed as a litmus test for Uhhur’s grip on the central Kenya voting block.

It had also been considered a test of the results of William Ruto’s forays into the region that is known to vote as a bloc.

William Ruto’s foot soldiers from Mt Kenya region on the other hand urged their supporters to help drive the last nail in the Jubilee party’s coffin.