Kiambaa by-election winner explains why the race was tight 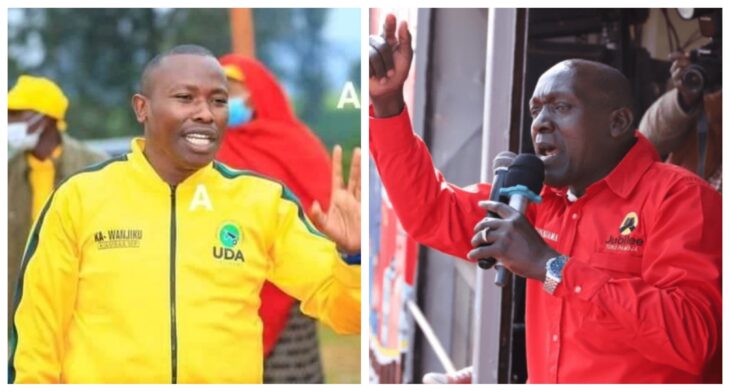 John Njuguna added that Kariri Njama was so close to him because of the state interfered with the process, prompting more voters to vote in Jubilee’s favour.

Kiambaa by-election winner John Njuguna Wanjiku has explained the tight race that resulted in a small margin between him and his bitter competitor Kariri Njama of the Jubilee party.

The tallying of the votes was completed on July 16, with John Njuguna having garnered 21, 773 votes against Kariri Njama’s 21,263 votes.

Speaking to the press after the results were announced, the Kiambaa by-election winner described the race as too tight.

John Njuguna added that Kariri Njama was so close to him because the government interfered with the process, prompting more voters to vote in the Jubilee party’s favour.

“Yesterday there was a lot of voter intimidation and bribery across Kiambaa constituency. Chiefs were coming out, giving out money, coercing people to vote in a certain direction. Maybe, especially our parents and grandparents must have felt intimidated,” he explained.

However, the Kiambaa by-election winner extended an olive branch to his opponent Kariri Njama, asking him to support his leadership for the good of Kiambaa people.

“In every journey, there is a winner and loser. We are all winners in the eyes of the Kiambaa people. I welcome them to join hands with me to build Kiambaa. They could be having ideas that I can add to mine,” he said.

The final results were declared after unrest in the Constituency on Friday morning.

During the slight chaotic moment, votes relayed by IEBC showed that UDA’s John Njuguna Wanjiku leading with 21,227 votes, closely followed by Njama Kariri who had 20,818 votes in 151 out of 154 polling stations.

On sensing a defeat, Jubilee’s Kariri Njama accused UDA of rigging. The mayhem at the tallying center led to the suspension of the tallying process, only for IEBC to embark on the same after calm was restored.

The Kiambaa constituency seat was left vacant in March 31, 2021 while receiving treatment at the Nairobi Hospital.