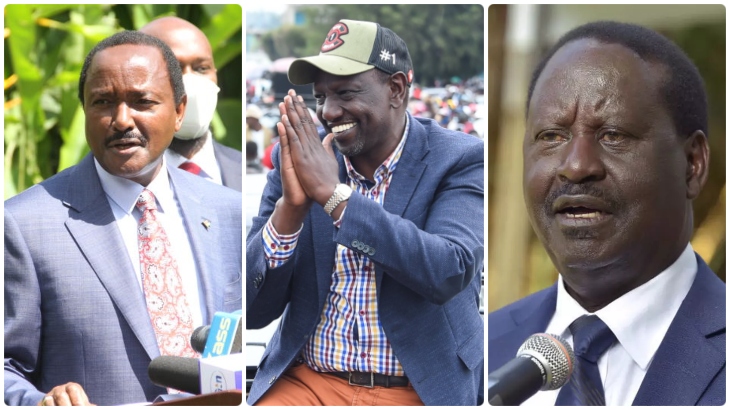 David Murathe believes Raila Odinga is the best placed person to be Kenya's next president but not William Ruto.

Deputy President William Ruto has said he is not bothered by rivals forming political alliances aimed at defeating him in the 2022 General Election.

Speaking during a church service in Kilifi, the second in command vowed to not join any political alliance and that he but is ready to face existing coalitions as a one-man army.

“Some are forming this alliance, while others are joining the other alliance. I want to tell them that I am preparing myself for them. I know you are with me and those in alliances should prepare for the shock,” Ruto said.

According to the DP, the political alliances in place are formed along tribal lines and based on personal interests.

“If they want to form alliances, let them go ahead, but they should be prepared to face the hustler nation. Leaders should be selected based on policies,”  he said.

When the news of the Jubilee and ODM coalition talks reached DP Ruto in June, he described it as a selfish act.

“The latest we had from Murathe and Tuju is that they have decided to go and merge Jubilee and ODM, which in my opinion is the most tragic thing that can ever happen,” Ruto said in an interview with KTN News on June 24.

There is no doubt that some political coalitions are formed for only one purpose; to defeat DP William Ruto in the 2022 General Elections.

During the burial of Former Kibwezi MP Kalembe Ndile on June 11, Kitui governor Charity Ngilu called on Raila Odinga and Kalonzo to unite so as to defeat Ruto in 2022.

She told them that if they do not unite, Ruto will have a field day in the oncoming General Election.

“If Kalonzo and Raila fail to unite ahead of 2022, then Ruto’s chances of success will be high. We must accept and work with Raila so that we beat Ruto,” She said.