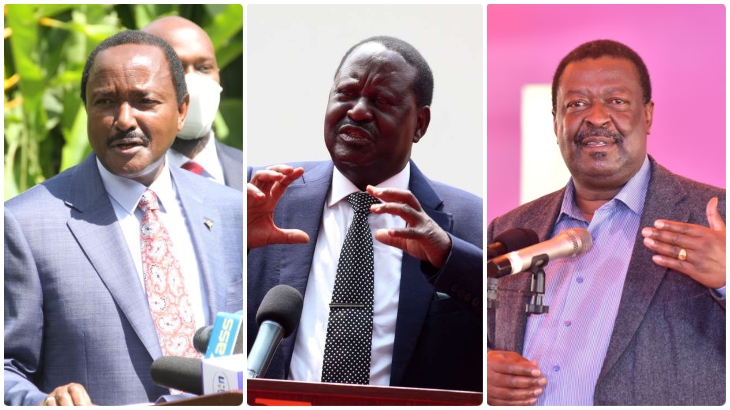 William Ruto is no doubt well aware he has no serious 2022 presidential challenger or at least, those who wish to take on him have not made clear their intentions.

With just one year to the next General Election where Kenyans are also expected to elect a new president, confusion still reigns among Ruto’s would-be challengers.

ODM leader Raila Odinga, the only man Ruto has acknowledged can seriously challenge him, has not come out clean to declare his interest in the presidency, only giving hints here and there.

Raila’s recent countrywide tours and social media posts on how to revive Kenya’s economy however point to a man planning to vie for the top seat.

The ODM leader’s misdoing is the fact that like the other presidential hopefuls who have shown interest in facing Ruto, he is still oscillating between going it alone and forming a coalition.

There are, however, a myriad of challenges in the plan to revive NASA; the other parties no longer trust Raila and his ODM party, accusing him of selfishness and dishonesty.

None of the other parties’ bosses want to work with Raila and his ODM again unless they are the ones being fronted as presidential candidates.

Raila on other hand has claimed he cannot throw his weight behind a weak candidate who will give William Ruto an easy stroll into State House.

“I have not refused to support somebody else. I have said that not once but several times that it must not be Raila Odinga,

“I am ready to support someone else but importantly who can I support that will ensure a win for us?” Raila posed in a recent radio interview.

His party ODM is also in talks to work with Uhuru’s Jubilee party ahead of the 2022 General Election although, in this arrangement, it is not clear who will be the presidential flag bearer.

Away from Raila, William Ruto’s other likely challengers Kalonzo Musyoka, Moses Wetangula, and Musalia Mudavadi are locked in another coalition, One Kenya Alliance, with KANU boss Gideon Moi.

While it looked good on paper upon formation, the coalition also faces a myriad of challenges that stop the members from fronting a challenger for William Ruto in time.

First, the four parties in One Kenya Alliance already have existing pre and post-election pacts with other parties which they have to denounce before legally participating in any meaningful 2022 discussions like having a presidential candidate.

While Moi’s KANU has a post-election pact with ruling party Jubilee, Wiper, ANC and FORD-K have pre-election pacts with NASA, as mentioned earlier.

Makueni Senator Mutula Kilonzo Junior has decried the confusion in picking presidential candidates and appeared to suggest Ruto’s newly rebranded United Democratic Alliance seems to be more ready than the competition of the 2022 presidential race.

“The confusion in the presidential race lies in NASA. I see both Raila, Kalonzo, and Mudavadi on the ballot… In my view, United Democratic Alliance (UDA) is rebranded Jubilee party,” he told Daily Nation.

National Assembly Speaker Justin Muturi has also declared he wants to vie for the presidency but without declaring on which political party, it is hard for anyone to take him seriously.

What is more, he does not enjoy the support of the entire Mt Kenya region et Ruto has shown through three by-elections that he can easily penetrate Central Kenya.

William Ruto appears to be taking total advantage of the confusion amongst his likely opponents and technically, the deputy president is campaigning against himself.

His hustler narrative, though highly criticized in the beginning, has forced even his perceived opponents, including Raila Odinga, to tailor their campaign messages around the economy.

The former Eldoret North MP recently said he will not join any coalition ahead of the 2022 presidential campaigns but will instead transform UDA into a national party.

“Some are forming this alliance, while others are joining the other alliance. I want to tell them that I am preparing myself for them. I know you are with me and those in alliances should prepare for the shock,” Ruto said at a recent political meeting.

Observers and analysts are now content, the stakes of the 2022 presidential race are heavily in favour of Willliam Ruto unless his opponents play better politics.