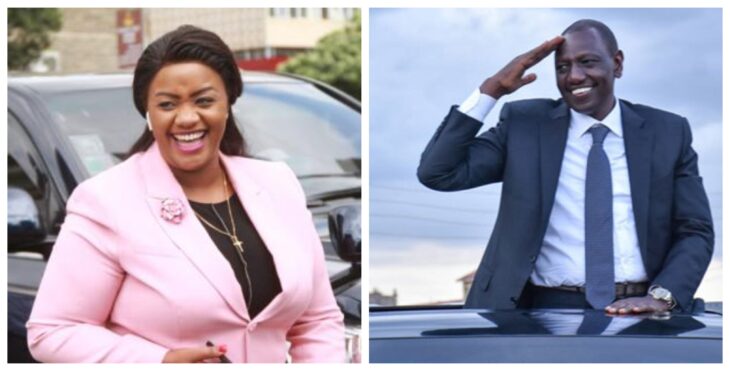 After the split in Jubilee Party, MP the Laikipia County MP associated herself with DP William Ruto.

Kivumbi.co.ke understands the Jubilee MP who was been until recently an ardent supporter of Jubilee party’s Kieleweke camp has now endorsed William Ruto’s 2022 presidential ambitions.

“After attending over 40 meetings with wananchi on the ground, I have discovered what the people want. As a wise woman,

” I am saying William Samoei Ruto is the best bet for the presidency. Do not waste your votes on nonstarters let us support Ruto,” said Cate Waruguru in an address to journalists.

For a long time, Wiper Party leader Kalonzo Musyoka has been termed as a watermelon due to his wavering political stand.

But now, Kalonzo has found his female match in the Laikipia Woman Representative.

The Laikipia MP Cate Waruguru is not new to DP Ruto’s Tanga Tanga camp, after the split in Jubilee Party, the woman representative associated herself with DP William Ruto.

Together with other female legislators allied to Ruto, Waruguru was a vocal member of the Inua Mama women group.

In June 2020, Waruguru made a political u-turn when she met ODM leader Raila Odinga at his Capitol Hill offices where they held closed-door discussions.

MP Cate Waruguru came out of the Capitol hill offices singing praises of President Uhuru, Raila, and the BBI.

However, her latest return to Ruto’s camp has not come as a surprise to many.

During the Kiambaa by-elections held on July 15, the bubbly MP said that she would give a political statement after the results of the polls were out.

“There has been a mass exodus in Jubilee Party. Soon and very soon I will be making an announcement on what my decision is,” the outspoken Cate Waruguru said.

Apparently, since the Jubilee party lost the Kiambaa contest, she has now decided to join the winning UDA team.

Her defection to Ruto’s camp comes barely a month after Jubilee lost another vocal female MP to William Ruto’s camp.