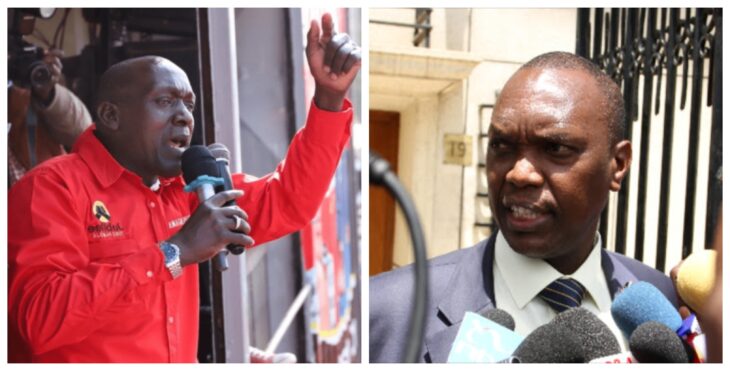 President Uhuru’s Jubilee party was turned into a laughing stock after its candidate Kariri Njama lost to UDA’s John Njuguna in the Kiambaa by-election.

Ndaragwa MP Jeremiah Kioni has explained why the Jubilee party has considerably lost popularity in the Mt Kenya region.

Speaking during an interview on Citizen TV, the legislator said that the diminishing popularity of Jubilee in the Mt Kenya region was a result of the negative propaganda being spread against the party.

Kioni admitted that indeed the party has lost grip of the Mt Kenya region although not all is lost if the results of the Kiambaa by-election were anything to go by.

“When I went to Kiambaa, it was very difficult for us to talk of jubilee party. In fact, the people had been poisoned so much that even at times when mentioning the name of the president, they would tell us to leave him alone,

“By the time we were finishing 3 weeks (of campaigning), people would seat and think with us. They would tell us where they think we left the rail, and what to do,” the Ndaragwa MP said.

While admitting that the Mt Kenya region has become hostile to Jubilee Party, Kioni said that they intend to win back the party’s support and the Kiambaa by-election results where Jubilee lost narrowly is enough evidence all is not lost.

“We are on an upward trend in Jubilee. We agree the ground in Mt. Kenya had been lost to propaganda, we are gaining it bit by bit. If in 3 weeks we could be able to get 50% from those who had lied to our people, we know what to do (ahead of next general election),” he said.

President Uhuru’s Jubilee party was turned into a laughing stock after its candidate Kariri Njama lost to UDA’s John Njuguna in the Kiambaa by-election.

However, the margin between the two was small with John Njuguna having garnered 21, 773 votes against Kariri Njama’s 21,263 votes.

The party is however convinced from the Kiambaa by-election where it recovered from a heavy defeat in the Juja by-election that it can do better going into 2022.

What is more? the Jubilee Party intends to appeal the results of the Kiambaa by-election, calling for a repeat in vote tallying.