Kalonzo, Mudavadi, and Wetangula divided over plan to drop Raila 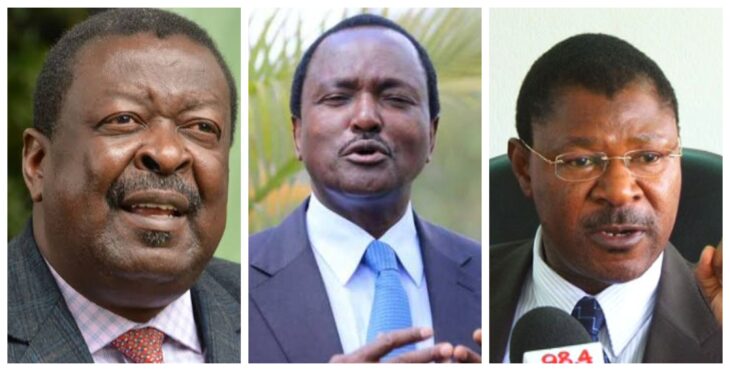 Musalia Mudavadi promised that OKA is going to make announcements on their 2022 plans days to come.

After forming the One Kenya Alliance(OKA), Kalonzo Musyoka(Wiper), Musalia Mudavadi(ANC), and Moses Wetangula(FORD Kenya) are divided over plan to drop Raila Odinga, who was their partner in the NASA coalition.

On Tuesday, July 20 the trio together with their OKA partner Gideon Moi held an extensive meeting to agree on their 2022 presidential candidate but this did not materialise because of their indecisiveness over the plan to drop Raila.

Sources privy to the meeting indicate that the technical committee asked the four principals to agree on whether to bring Raila on board or not.

“The technical committee has told the four principals to agree if they want to work with Raila or not and report to the team,” the source said.

The source further detailed that Gideon Moi (KANU) showed willingness to work with the ODM leader while Kalonzo, Mudavadi, and Wetangula were uncertain on whether to drop Raila.

The trio is only ready to work with Raila if he will be joining the coalition on a fair playground, and not with his own demands.

In the meeting, confusion was also witnessed when the leaders failed to agree on the best method to pick their presidential candidate.

While Mudavadi pitched for a “scientific” method to choose a flag-bearer, Kalonzo said it should be done on the basis of “past track record, political experience and mutual trust.”

Even though the One Kenya Alliance is divided on whether to drop Raila or bring him on board, the ODM party has it’s own demands to the trio.

On July 6, the ODM party said that the only way Raila Odinga could support one of them is if they agree to undergo a joint presidential nomination exercise and one of them emerges the winner.

With the division among the NASA and OKA pacts, DP William Ruto stands out as the only formidable presidential candidate in 2022.