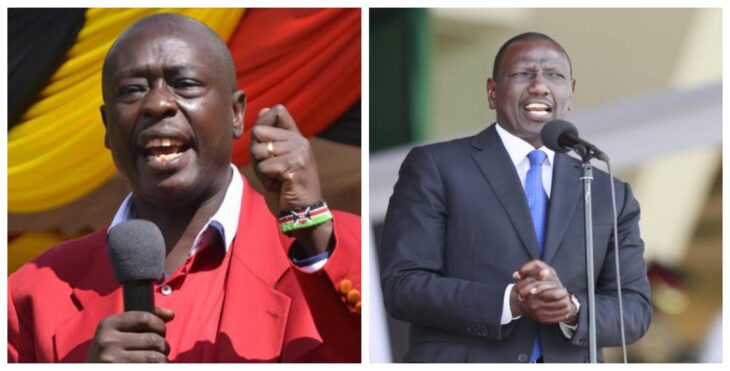 According to the legislator, the commission is pursuing him because of his relationship with DP William Ruto.

Mathira MP Rigathi Gachagua has partly explained why he is wealthy amid a KSh 12 billion scandal against him.

In an interview on Citizen TV, Gachagua who is DP William Ruto’s foot soldier explained that he made his money way before his debut in politics.

The legislator gave a glimpse of his suave business skills which he said started during his days in campus.

“I am happy that he (MP Jeremiah Kioni) is acknowledging that am a very prudent businessman. I hope he can tell the people pursuing me that I started doing business 40 years ago,

“At the university, we used to get KSh 2,600 as boom, I would organize discos and pick half of the money from these guys; I had a car, I had a factory for sweets… I started long ago,” Rigathi Gachagua explained.

The Mathira MP denied claims that he amassed some of his billions when his late brother Nderitu Gachagua was the Governor of Nyeri county.

“I have never done business with Nyeri county and I did not do it. I want people to stop pursuing my brother when he is resting. Let him rest in peace,

“I have done business with the national government and other people in other counties. My brother was clear we did not do business with Nyeri County. If anybody has evidence, bring it on,” he said.

Mathira MP Rigathi Gachagua is on the radar of investigators over a KSh 12 billion scandal. He is said to have gotten part of his wealth illegally.

However, according to the legislator, the detectives are pursuing him because of his relationship with DP William Ruto.

“Why did they not pursue me when I was supporting President Uhuru? When I was his Personal Assistant?,” Gachagua posed.

The DP himself has cautioned the EACC against targeting his allies in the fight against corruption.