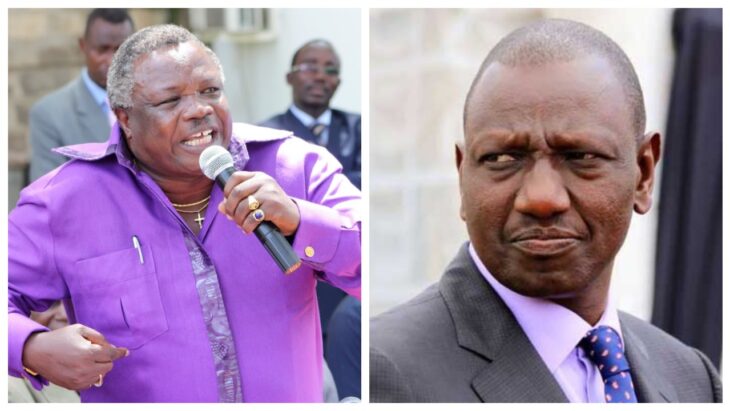 Francis Atwoli does not support his presidency, but that does not mean that he wishes or plans to eliminate William Ruto.

On Monday, July 19, Atwoli accompanied ODM leader Raila Odinga to Tana River County and used the opportunity to warn Kenyans against William Ruto’s quest to be Kenya’s next president.

In a video that has since gone viral on social media, the COTU boss warned Raila Odinga to be very careful with Ruto since he has a dangerous plot on the 2022 General Election.

“Raila (Odinga), kindly keep your eyes on (William)Ruto. He will reject the outcome (of the 2022 presidential election)which may lead to a crisis in the country. He wants to import firearms into the country now wonder you see him befriending presidents of neighbouring countries,” Atwoli said.

Other than the security threat, the COTU boss also said that the hustler narrative which tends to imply the common person also needs to be on the political and economic high table and is DP Ruto’s campaign message is dangerous.

The Trade unionist has been consistent in expressing his hatred of William Ruto and at one point even wondered why media houses invited him for interviews.

One major bone of contention between the two is BBI matters and their relation to the postponement of the 2022 General Election.

On June 17, Atwoli suggested the 2022 General Election should be postponed to give room for a referendum.

“If anything happens and they do not give us judgement, we will still move to the Supreme Court,

“If we do not get it then we will appeal through our Parliamentarians to extend the fourth coming election even by one year,” Atwoli said.

In a retaliatory remark, DP Ruto and his allies separately silenced the COTU boss, slamming him for being among those pushing BBI because of their own selfish gains.

“You are lying to yourself, Kenya is not your country, it belongs to all of us. Stop the noises and impunity, if you are drunk, don’t make it our problem,” the second in command said.