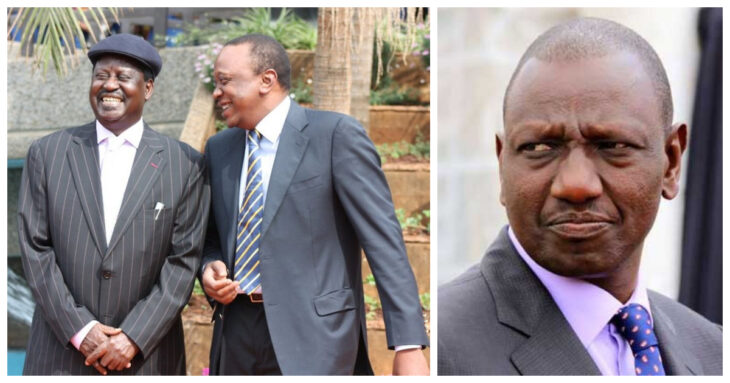 Kenya’s President Uhuru Kenyatta relationship with his deputy started deteriorating with the introduction of Raila Odinga into government through the famous February 2018 handshake.

Jubilee Party Secretary General Raphael Tuju has said President Uhuru Kenyatta is too preoccupied to spend his energy on the politics around William Ruto impeachment.

Speaking in a TV interview, Tuju admitted a William Ruto impeachment motion is not an easy task considering the political lobbying that is needed to get the required number of MPs to support the motion.

He revealed that the president has chosen to ignore such an option despite the fact he is not obviously in a good working relationship with his deputy president.

This, he went on, is to avoid shiting his focus from pushing through his development agenda to Kenyans as well as dealing with other pressing matters, few months to his retirement.

“The president has a year and few months to retire. He has a choice to make. Should he deal with COVID-19, ensuring that the economy survives…or should he spend his energy doing all political maneuvering to get rid of the deputy President or those who are not following Jubilee,

“He has decided to ignore (William Ruto impeachment),” said Tuju in an interview with KTN on Wednesday, July 21.

Constitutionally, Deputy President William Ruto’s impeachment needs at least 2/3 of parliamentarians to be achieved and such motions involve alot of political lobbying, the media attention around the same notwithstanding.

To table such a motion, an MP needs the support of 117 Members of Parliament. The other option for Ruto to leave office is through a personal decision to resing or death.

Raphael Tuju, who never hides his contempt of Ruto, went ahead to say the deputy president is very lucky as the constitution also protects him from being directly fired by his boss Uhuru Kenyatta

Ever since the relation between deputy resident and his boss started degenerating, close allies of the president have been toying with the idea of a William Ruto impeachment motion.

In February this year, Jubilee Vice Chairman David Murathe who also never hides his hatred of William Ruto said there was a plan to have the deputy president impeached.

He even said there will be an eviction party at Ruto’s official residence in Karen, Nairobi.

William Ruto has been on record saying his time at Jubilee Party, a party he helped create, is over and he will vie for the presidency in 2022 on a United Democratic Alliance (UDA) ticket should Jubilee, which he is still technically a deputy leader, deny him the ticket.