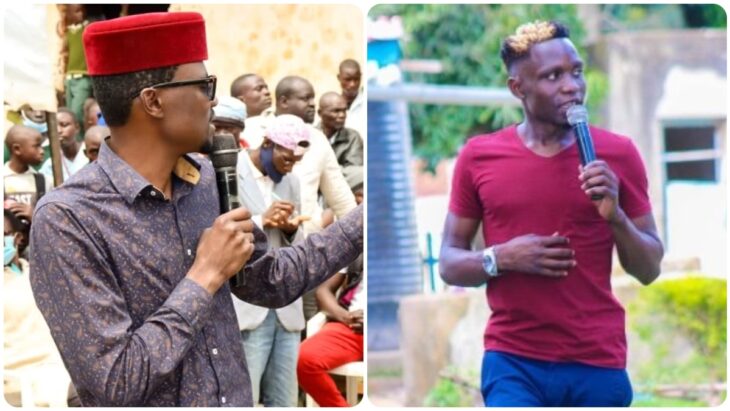 Kimilili MP Didmus Barasa has found himself in trouble after he allegedly clobbered a popular western Kenya musician over KSh 3.4 million debts.

A heated debate ensued after a contractor-cum local Luhya musician barred Barasa from commissioning the classes he had built unless he is paid.

The legislator had arrived at Baptist Rurare primary school to commission the classrooms built by the National Government Constituency Development Fund when he discovered that the contractor had locked them.

The Vindu Vichechanga hitmaker and his colleague Ronald Graham Wafula had set up five classrooms and asked the lawmaker to first clear their dues before opening the classes.

In a video that went viral on Twitter, the contractor was heard accusing the MP who is under scrutiny for fake academic papers of conning youths by awarding them CDF tenders and failing to pay them.

“When we asked the MP to pay us he kept saying he only pays contractor full dues upon completing a project and we should not be worried,

“I have closed these classes because they cannot begin to operate without me being paid as they will be spoiled by children and he might end up refusing to pay me completely,” he said.

This is not the first time the MP has been landed into chaotic scenes.

This was after the legislator who has been condemning Wangamati’s style of leadership while addressing the mourners accused the county boss of not initiating even a single project in his Kimilili Constituency.

“The worst mistake Bungoma made was electing Wycliffe Wangamati as the governor. The man is a total failure,” Barasa told mourners.

Upon hearing these, Wangamati’s bodyguard Hassan Karim walked to the podium, snatched the microphone from Barasa and tried to strangle him.

Western Kenya MPs could be arrested for fake military titles