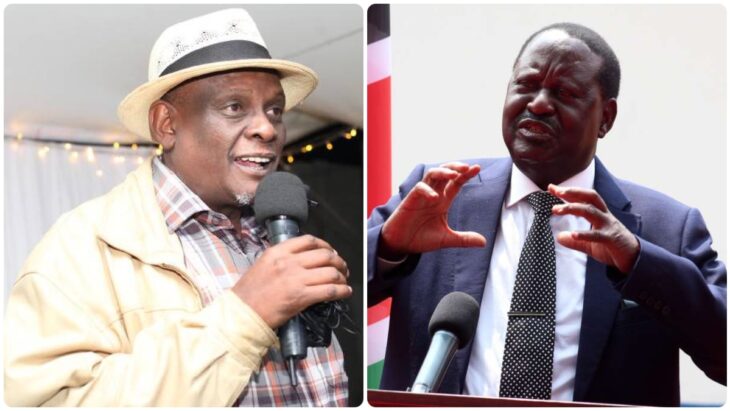 Jubilee Party has made official their plans to enter into a coalition deal with Raila Odinga’s ODM party.

Speaking on Wednesday, August 4, at a city hotel where Raila and Murathe attended a meeting with a delegation of youths from Murang’a County, Murathe said that the country should now prepare to be governed by the former prime minister.

“Where you see Raila Odinga, you see President Uhuru… I had (said before) prepare for Jakom (Raila Odinga) to be the fifth president,” Murathe said.

Murathe, who was named among the beneficiaries of the multi-billion scandal at the Kenya Medical Supplies Authority, further said they will do everything in their power to ensure that Raila succeeds President Uhuru Kenyatta as the fifth President of Kenya even if the process of amending the constitution through BBI flops.

“If Building Bridges Initiative bill will not have gone through, we will plan on how to make Raila Odinga the president under the current constitution because we are sure if he gets the seat he will bring back the BBI,” Murathe added.

The Jubilee Vice Chairman further revealed that the Mt Kenya region has resorted to backing Raila’s bid for the presidency based on his plans for the country and the role he played in uniting the country after the chaotic and dramatic wins by President Mwai Kibaki and Uhuru Kenyatta in 2008 and 2017 respectively.

“Raila (Odinga) has a better plan than, not like the wheelbarrow being advocated by Deputy President William Ruto which is anchored on the handout culture. What we need is for our youths to be empowered and employed,” he said.

He further revealed that President Uhuru Kenyatta is expected to hold a secret meeting with his handshake counterpart Raila Odinga at the Mombasa State House to potentially discuss the 2022 succession matrix.

“Jakom (Raila Odinga) is on his way to Mombasa to meet president Uhuru Kenyatta,” he added.