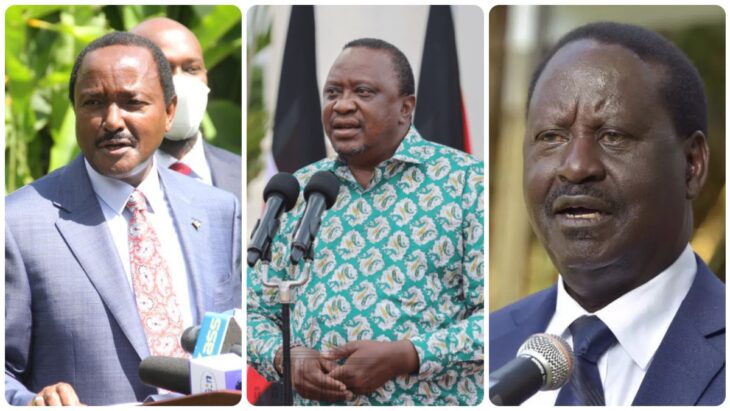 This raised other concerns from Kenyans, who opined that the opponents of Wiliam Ruto are state projects.

President Uhuru Kenyatta has summoned ODM leader Raila Odinga and the One Kenya Alliance (OKA) four principals to State House Mombasa in what appears to be a culmination of Uhuru’s decision to back his handshake partner to succeed him.

This comes barely a week after the president convened a meeting with the leaders whose main goal was to unite them and back a Raila presidency, a move that did not bear fruit prompting Uhuru to give them a one-week ultimatum to discuss and get back to him.

Kivumbi.co.ke understands the meeting is to be held today Wednesday, August 18, is a follow-up to the meeting which focused on forming a formidable team to face his estranged Deputy President William Ruto in 2022.

“The president has convened a meeting today Wednesday, August 18, with party principals Raila, Kalonzo Musyoka (Wiper), ANC’s Musalia Mudavadi, Kanu chairman Gideon Moi and Ford Kenya’s Moses Wetang’ula to take stock of what they have done since their engagement last Tuesday,” the sources said as quoted by the Standard.

Yesterday, the Jubilee Party made official their plans to enter into a coalition deal with Raila Odinga’s Orange Democratic Movement party.

The ruling outfit wrote to the four OKA affiliate parties informing them of its decision to enter into a pact with ODM and informed them that they were free to join in the spirit of fostering national cohesion.

On the same day, the former premier while launching his 2022 road map in Nakuru reassured the commitment of the ruling party working with the opposition ahead of the General Election.

On the same day, the OKA principals announced that they will field a presidential candidate in the much-awaited 2022 presidential election but did not reveal who the candidate shall be.

Political analyst believe there are indications Raila will eventually fly the One Kenya Alliance presidential flag once the finer details of his ODM party and Jubilee party coalition talks are finalised.

This is because One Kenya Alliance principals indicated that they are still willing to bring Raila to the fold as part of the alliance’s plans to form the next government.

Interestingly though, both KANU and Wiper have some form of a working agreement with the Jubilee party, which is planning to enter another pre-election deal with Raila’s ODM party before 2022.