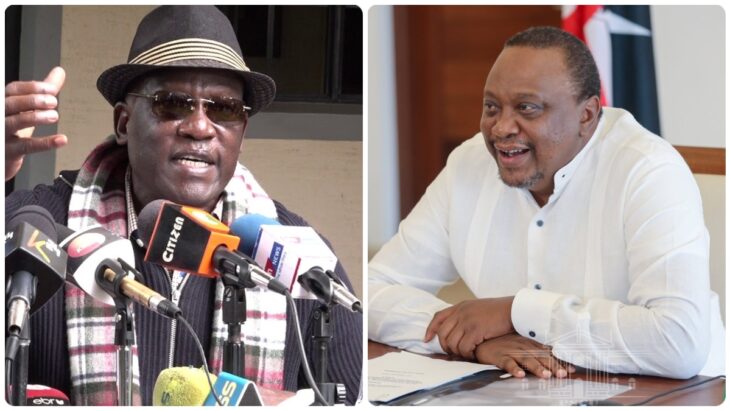 Former Machakos Senator Johnson Muthama has said it is ridiculous for President Uhuru Kenyatta to ask his Deputy President William Ruto to resign.

Former Machakos Senator Johnson Muthama has said it is ridiculous for President Uhuru Kenyatta to ask his Deputy President William Ruto to resign.

This comes barely hours after the Head of State dared Ruto to resign if he is not pleased with the Jubilee Government.

Taking to his Twitter account on Monday, August 23, Muthama, who is also the chairman of the United Democratic Alliance (UDA) party, said it was the President who should resign because he had violated the country’s constitution.

“It’s laughable for Uhuru to call on William Ruto to resign. The two were elected by Kenyans and swore: “to obey, preserve, protect and defend the Constitution of Kenya.”

“It’s now obvious who tried to disobey, betray and mutilate the constitution of Kenya and can therefore resign,” Muthama said.

The outspoken politician said Uhuru should blame himself for entering into a working partnership with Raila Odinga, something which has destroyed the Jubilee party.

This is because, he said, Raila Odinga is known for causing mayhem and destruction into parties he joins or works with.

On Monday, August 23, the Head of State called out his estranged deputy for accusing the government of having failed, while taking credit for some developments in the country.

“It will be honorable that if you are not happy with it, you would step aside,” President Uhuru said in an indirect attack at his deputy William Ruto.

Early this month, the second in command who has been pushed to the periphery of the government he co-formed with his boss declared that he will officially resign at a time of his own choosing.

Ruto blamed Uhuru for what he claimed was a violation of the Kenyan development agenda, especially in the second term, accusing the President of bringing people to the government who came to derail the Big Four Agenda.

“We are not guests in any place. We join parties by choice and leave by choice. Nobody should ask why we are still here,” said Ruto when asked why he was still in a government that he believes has failed to deliver on its pre-election pledges.