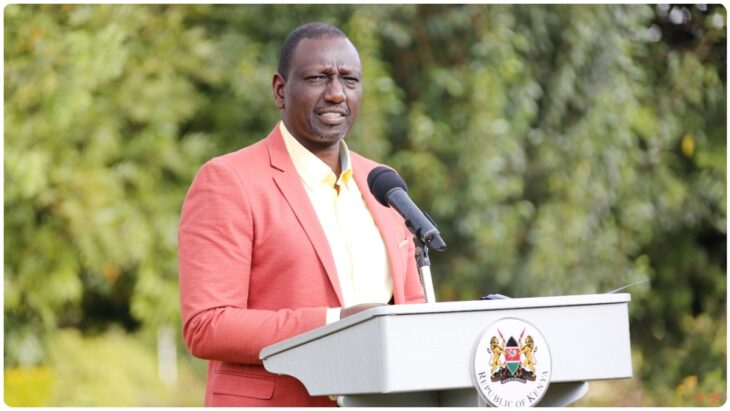 William Samoei Ruto is Kenya’s deputy president. Wiliam Ruto net worth is estimated to be in billions but just like many other politicians, it is hard to pinpoint his assets. This article shall try to list some.

He became the second in command after successfully contesting for the presidency in the 2013 General Election as Uhuru Kenyatta’s running mate.

Ruto is a famous figure in the Kenyan political scene especially as he eyes to succeed Kenyatta who is in his second and final presidential term.

William Kipchirchir Samoei Arap Ruto was born on December 21, 1966 to Daniel Cheruiyot and Sarah Cheruiyot. He was born in Sambat village, Kamagut in Uasin Gishu county.

Ruto attended Kamagut Primary School and after sitting for his Certificate of Primary Education in 1982, he proceeded to Wareng Secondary School for his Ordinary Levels.

He would then enroll at Kapsabet Boys High School in Nandi county for his Advanced Levels.

The politician then joined the University of Nairobi for his undergraduate studies. He graduated with a Bachelor of Science (Botany and Zoology) in 1990.

In 1991, he enrolled for his Masters of Science (Plant Ecology) in the same institution but deferred in 1992 to kick start his political career.

He, however, resumed his studies for his master’s degree and graduated in 2011.

On December 21, 2018, Ruto graduated with his doctorate degree in Plant Ecology from the University of Nairobi.

He was offered an opportunity to lecture at Harvard University but turned down the chance to serve the people of Kenya.

William Ruto started his political career in the early 1990s by vying for various positions in the Kenya National African Union (KANU).

Through his church activities, he met then-president Daniel Moi who would play a huge role in shaping his political career.

He prides himself as a self-made politician who rose from humble beginnings to battle it out with his fellow politicians born in riches.

With late Daniel Moi’s support, Ruto formed a group, Youth for KANU, which was largely used to campaign for Moi’s re-election to the presidency in 1992.

In 1997, Ruto gained a foothold in mainstream politics after successfully contesting for the Eldoret North Parliamentary seat, a position he would hold until the 2013 General Election.

His win in the Eldoret North constituency earned him the attention of President Moi who appointed him as KANU’s Director of Elections.

During the 2002 electioneering period, Ruto got an appointment to Moi’s Cabinet as an assistant minister in the Home Affairs docket.

This got Ruto an appointment as the Home Affairs Minister.

In 2005, he was appointed as the KANU Secretary General. In the same year, Kenya went for a referendum.

It is during this time that Ruto and other key political figures formed the Orange Democratic Movement (ODM) to campaign against the proposed constitution.

In 2006, Ruto announced his bid for the presidency under an ODM ticket in the 2007 polls. However, he lost the party’s vote to Raila Odinga whom he promised to support.

The heated electioneering period tore the country apart. Election clashes erupted when Mwai Kibaki was declared the winner in the presidential poll.

Kibaki and then-rival Raila had to form a coalition government to pacify the nation.

This gave birth to a power-sharing coalition government in which Ruto got appointed as a Minister for Agriculture.

In 2010, he would get swapped to the Higher Education Ministry as the head, but his stint in the docket was short-lived as he got fired in 2011 but continued to serve as the Eldoret-North MP.

In the months leading to the 2013 elections, his United Republican Party would merge with Kenyatta’s The National Alliance (TNA) to form the Jubilee Coalition which won the polls with Kenyatta as the president and Ruto as Kenya’s first deputy president under the 2010 Constitution.

He has held that position for eight years. He has so far announced his bid for the presidency in 2022 under his hustler nation movement, ambitions which have seen him lock horns with Kenyatta since 2017.

William Ruto has been cagey on publicly and out rightly disclosing his ideal net worth, nonetheless, it is public knowledge that he is one of the richest individuals in Kenya.

Besides his political career, Ruto is an astute businessman, a self-proclaimed chicken-seller who owns chains of businesses in Kenya, including the controversial Weston Hotel.

In August 2021, Interior CS Fred Matian’gi revealed some of Ruto’s multi-billion properties as he listed just how well the deputy president is well protected.

William Ruto tied the knot with Rachel Chebet in 1991. Together, they have six children with their firstborn being Nick Ruto.

A few months ago, the couple married off their daughter June Ruto to a Nigerian professor Alex Ezenagu. The wedding was held at Ruto’s Karen residence.

Ruto also has an adopted daughter, Nadia Cherono whom he adopted from Ippolita Children’s Home in 2016.

In 2017, Ruto was dragged to court by his one-time secret lover Priscah Bett over failure to cater for their daughter Abby whom they sired in 2005 when she was a university student.

William Ruto later confirmed on Twitter that he was the father to the child adding she was well-taken care of.