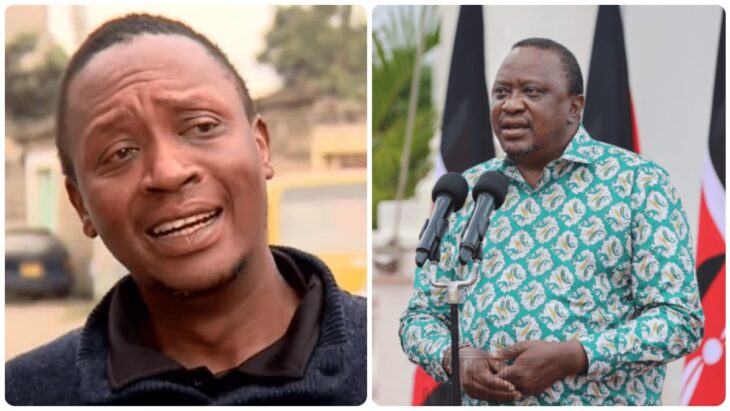 President Uhuru's lookalike Michael Gitonga is now requesting a DNA test to confirm whether he is the brother to the Head of State.

President Uhuru lookalike Michael Gitonga is now requesting a DNA test to confirm whether he is the brother to the Head of State.

Speaking to TV47, Gitonga, popularly known as Uhunye wa Umoja, said his dream has been to meet the President and expressed optimism one day he might reunite with his ‘brother’ President Uhuru.

“Many call me Uhunye wa Umoja and I have hopes that one day, I will be able to meet my brother. I think he is my brother. I would want a DNA to establish if we are related,” he said.

President Uhuru’s lookalike said since he came into the limelight in 2020, majority of members of the public have been approaching him thinking he is the President’s brother.

“You find guys asking me for jobs, favors. People want me to link them with certain people (the President). I have to ignore them. I just listen to their problems and walk away. Because I am also just struggling to make ends meet like them,” he said.

Last year, Gitonga rose to prominence after a photo of him showing his striking resemblance with President Uhuru Kenyatta surfaced on social media platforms.

Gitonga, who was then addicted to drugs said he spent three months in rehab and has since quit drinking alcohol.

“I stopped taking alcohol, and I currently work with Catholic sisters and NACADA,” he said.

Uhunye wa Umoja who was gifted a house by well-wishers a few months ago said he moved out after four months after he realized that the same well-wishers were using him for their own gain including marketing purposes.

In a previous interview with TUKO.co.ke, President Uhuru’s lookalike said he was born in 1982 in Nairobi’s South B to plice officers.

Interestingly, his mother once worked as an administration police officer in Gatundu, Uhuru Kenyatta’s rural area.