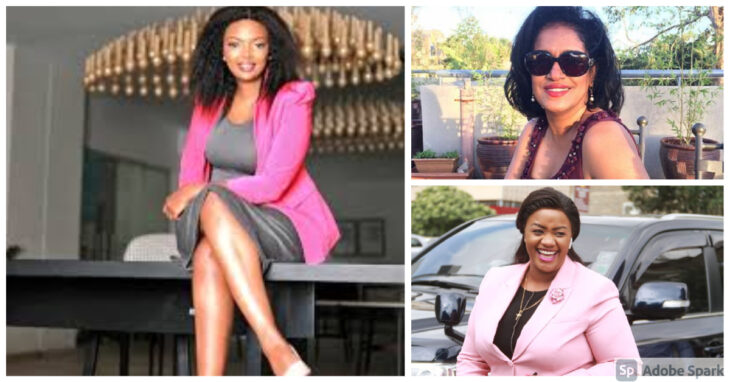 Kenya is endowed with lovely female politicians. They make sure to have heads turning with their over-the-top fashion taste, majorly display on their social media platforms.

From the gorgeous Laikipia Woman Representative Cate Waruguru to her Nairobi counterpart Esther Passaris who does not age a day, here are the top 10 stylish female politicians in Kenya.

Starting us on the list is the gorgeous Laikipia Woman Representative Cate Waruguru who started her career in politics in her early 20s.

It goes without saying that the woman rep’s fashion sense is enviable. Whether she is donning a skirt suit, a gown, a trouser or dress, Waruguru keeps it classy and stylish.

Recently, she celebrated her 35th birthday and she had on an exquisite black gown with hints of pink.

The lovely Kirinyaga Woman Representative Purity Wangui Ngirici is another politician who always sets tongues wagging with her fashion sense.

Ngirici is not afraid to tap into her younger self and this is evident in her wardrobe. At one time, she will step out with knee-high boots, a pair of jeans and a stylish top and on the other, she will look all official in an expensive trouser suit.

Whichever day, she makes sure to have heads turning.

The woman rep’s marriage to her billionaire husband Andrew Ngirici has been a matter of public debate. While campaigning for her seat in 2017, the Ngiricis went all out with their helicopters and money to popularise her bid.

She is arguably one of Kirinyaga County Governor Anne Waiguru’s worst nightmares as the two hardly see eye-to-eye.

With deep pockets and strong grassroots mobilisation skills, Ngirici plans to unseat Anne Waiguru in the 2022 General Election and many believe it will be a tough contest.

Many know Karen Nyamu as an ambitious, and controversial lawyer who tried her luck in the Nairobi Woman Rep seat in 2017 but failed.

However, she is one of the most fashionable politicians in the country. Whether it is a night out with her friends or attending a serious meeting, Nyamu makes sure her outfits are stunning enough to grab attention.

She is looking to take a second stab at the Nairobi Woman Rep seat in the forthcoming 2022 General Election.

Besides her political career, Nyamu has in recent months, attracted criticism and created frenzies on social media due to her baby daddy issues with Kikuyu benga musician Samidoh.

The two share a son and often, Nyamu will share snippets of her life with the musician who is actually married.

What would this list be without Nominated Senator Millicent Omanga’s name? The classy William Ruto-allied lawmaker knows how to please her fans with her stylish designs.

She may choose to keep it official on some days but other days, she will step out with a short gorgeous dress and boots or a nice pair of jeans and Kenyans love her for it.

Before joining politics, Millicent Omnaga said she was but a mere bedsheet seller. She confessed to having made her first million doing the business.

She was brought into politics by William Ruto who first influenced her appointment to the board of Kenya Electricity Generating Company after Uhuru and Ruto took power in 2013.

The outspoken politician has previously credited William Ruto for her rise in politics. She was nominated by the Jubilee party after the 2017 General Election having lost in the party’s primaries while attempting to get a ticket to vie for nairobi Woman rep seat.

Omanga has been particularly vocal in Uhuruto’s second term owing to her allegiance to the deputy president. She is seeking to run for Nairobi woman rep in 2022.

Nakuru Senator Susan Kihika also qualifies to be on this list, I mean who doesn’t admire her gorgeous dresses which seem to be her favourite, subtle jewellery and fabulous hair.

Looks like she abides by the keeping it simple and classy rule. On most days, she will opt for a long, lovely summer-like dress paired with a blazer and other days, she will go for a pair of jeans, and a nice top.

Daughter of one of Kenya’s renowned politicians Kihika Kimani and US-educated, Susan Kihika left her high-flying law career in the US and came back to join politics in Kenya.

She started as the first Speaker of Nakuru County Assembly 2013-2017 before vying successfully for the county’s senatorial seat under the Jubilee party.

The senator is known for her assertiveness and eloquence. She is never shy to take on her perceived adversaries. She is part of 41 children of her late father.

The senator is a well-known defender of Deputy President William Ruto, she often calls out the Jubilee government for sidelining the Deputy President. She is planning to run for the Nakuru gubernatorial seat in 2022.

To say Nairobi Woman Representative Esther Passaris ages like fine wine would be an understatement; at 56 years of age, the politician still enchants Kenyans with her heart-melting looks.

Whether she chooses to rock a skirt or trouser suit or a nice, gorgeous gown or dress, the politician keeps it elegant.

Being a first-time woman representative, Passaris is expected to fight on keeping her seat for a second term. She is also a well-known philanthropist and vocal ODM lawmaker.

Esther Passaris is better known as a social entrepreneur and famous for her Adopt-a-Light company which helped light up the streets of Nairobi while selling advertising space.

In 2016, Passaris was awarded most influential woman in business and government by Global CEO based in South Africa.

Naisula Lesuuda is the Samburu West Member of Parliament. Lesuuda loves colourful outfits but a fun fact about her is that she does not forget her culture.

She, will, once in a while, accessorize her outfits with a touch of Samburu culture.

Besides representing her culture through her fashion sense, the lawmaker also runs a non-governmental organisation in which she champions peace for her community and advocates for the rights of vulnerable children and women.

She joined politics through a nomination to the senate by President Uhuru’s party TNA in 2013 after strongly participating in the party’s campaigns.

In 2016, she switched from TNA to KANU and announced plans to vie for Samburu East Parliamentary seat in the 2017 General Election. She won by a narrow margin but become the first female MP in the constituency.

The former Journalist became the youngest woman in Kenya to win the presidential Order of the Grand Warrior in 2010 due to her efforts to restore peace in her Samburu community.

Lesuuda is single and without any children.

She recently excited Kenyans during her birthday after donning an elegant gold-coloured gown.

Sabina Chege burst into the political scene in 2013 when she won the Murang’a county woman rep seat by a landslide.

The former media personality later defended her seat in the 2017 General Election as her political influence continued to soar.

He previous stints in Kikuyu vernacular Radio stations is said to be the reason she has a strong connection to the grassroots and is said to be a force to reckon with, politically.

The Masters in Communication graduate from Nairobi University is married and is a mother of three children.

She has declared her interest in succeeding Murang’a Governor Mwangi Wa Iria in next year’s polls, a decision that will put her against some tough opponents in the race.

Anne Thumbi is a nominated Member of County Assembly (MCA) in Nairobi who also grabbed headlines in 2019 after she said she was late Ken Okoth’s lover.

Not much was known about her before then. She is however a nurse by profession who previously worked with Aga Khan hospital before her nomination to the Nairobi County Assembly.

Besides the controversy, Thumbi doubtlessly dresses to kill. A quick spot check on her social media platforms will leave you drooling over her classic dresses, suits and casual wear.

She has once faced Jubilee party disciplinary committee over disloyalty to the party and was almost ejected.

The nurse-cum-politician has on several occasions been seen volunteering in various county hospitals that are overwhelmed with handling COVID-19 patients.

Millie Odhiambo does not need any introduction. She is a vocal ODM leader who currently serves as the Mbita constituency lawmaker.

Besides politicking, Millie does not disappoint when it comes to her fashion sense. Whether she is donning an official or casual ensemble, the politician keeps it chic.

The professional lawyer with a bias in human rights and gender issues is known for taking her perceived enemies head-on and takes no prisoners.

Married to a Zimbabwe man, Millie was first nominated to parliament by Raila Odinga’s part, ODM 2007-2013 before winning her seat in the 2013 and 2017 General Election.

Laikipia Woman representative sympathises with Raila Odinga ‘he is being misled’