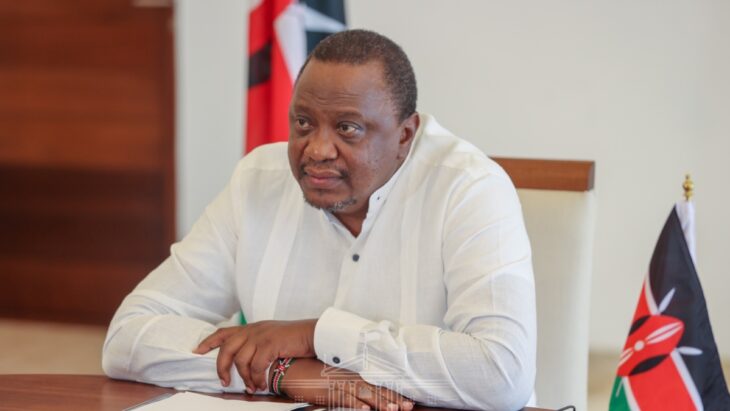 With barely 10 months to the General Election, Kenya’s President Uhuru Kenyatta has disclosed his next venture when he retires in 2022.

Kivumbi.co.ke will take a look at Uhuru Kenyatta net worth. Uhuru Kenyatta is the fourth and current Kenyan president and is serving his second and last term in office having been re-elected in 2017.

The Jubilee Party leader was first elected Head of State in March 2013 having first unsuccessfully tried to vie for the presidency in 2002.

Uhuru’s father Jomo Kenyatta was Kenya’s founding president who ruled from 1964 to 1978. He died while in office.

Uhuru Kenyatta is the son of Kenya’s founding president Mzee Jomo Kenyatta and Mama Ngina Kenyatta. He was born on October 26, 1961.

According to a biography detailing Jomo’s life, Uhuru Kenyatta was conceived in an iconic three-bedroom house also known as the Victorian bungalow in Maralal, Samburu county.

The veteran politician is a member of the Agikuyu community dominant in Central Kenya. The community has produced 3 of the county’s four presidents since independence, 1963.

Uhuru Kenyatta is an alumnus of the prestigious St Mary’s School in Nairobi. After completing his high school studies, he joined Amherst College in the United States to study economics, political science, and government.

After graduating from college, he returned to Kenya and founded an export company – – Wilham Kenya Limited.

Uhuru first tried his luck in politics in the 1997 General Election vying for the Gatundu South parliamentary seat. He lost to Moses Mwihia.

In 1999, the late retired president Daniel Arap Moi appointed Uhuru to chair the Kenya Tourism Board, raising his political status.

The former’s decision was deemed as a great step that helped the latter climb the political ladder.

In 2002 as Moi retired, he named Uhuru Kenyatta his preferred successor killing the dreams of many KANU era politicians who were looking forward to his endorsement.

Uhuru Kenyatta contested the 2002 presidential elections on a KANU ticket against a united Opposition out to ‘teach’ retiring preside, Daniel Moi, a lesson for betraying them.

The poll was won with a landslide by Narc’s Mwai Kibaki who received support from former KANU loyalists led by Raila Odinga, Kalonzo Musyoka, and Musalia Mudavadi.

After the resounding defeat that ended KANU’s 40-year rule, Uhuru conceded defeat and took over as official leader of the opposition.

In January 2005, Uhuru was elected KANU chairman after edging out the late Nicholas Biwott in the party primaries.

In 2005, Uhuru Kenyatta teamed with rebel Cabinet ministers led by Raila Odinga to campaign against the push for constitutional amendments.

As a result, the Orange Democratic Movement (ODM) was birthed after the orange side (NO) defeated the banana faction (YES).

Uhuru Kenyatta joined hands with Kenya’s third president Mwai Kibaki in the 2007 General Election despite the fact he was the then official opposition leader.

It was the first time an opposition leader supported the government of the day in Kenya.

In 2012, Uhuru Kenyatta was named in the famous Ocampo Six as one of the perpetrators of the 2007/2008 post-election violence that led to the deaths of over 1,000 people and displacement of thousands of others.

After being arraigned at the International Criminal Court at The Hague, he denied the charges.

He was acquitted in December 2014 for lack of sufficient evidence.

The year when Uhuru Kenyatta and William Ruto, then referred to as the ‘dynamic duo’ with their respective parties,-The National Alliance (TNA) and the United Republican Party agreed to enter a pre-election agreement ahead of the 2013 General Election.

The duo worked together in the 2013 presidential elections as a presidential candidate and running mate respectively.

They won the presidential poll with 6.1 million votes representing 50.07% while his closest challenger Raila Odinga came second with 5.3 million votes (43.7%).

Uhuru Kenyatta once again maintained William Ruto as his running mate in the 2017 presidential elections this time opting to collapse their respective parties and many others to form a giant party, Jubilee.

His archrival Raila Odinga contested on the ODM ticket under the National Super Alliance, having teamed up with Musalia Mudavadi, Moses Wetangula, and Kalonzo Musyoka.

According to official IEBC results, Uhuru Kenyatta garnered 54.1% of the total valid votes against Raila Odinga’s 44.9%.

Unsatisfied with the results, Raila challenged the outcome at the Supreme Court leading to nullification by the bench led by the then chief justice David Maraga.

On March 9, 2018, President Uhuru Kenyatta ceased hostilities with Raila Odinga in what culminated into the handshake and the Building Bridges Initiative.

The duo has worked together since then and launched several government projects together.

According to media reports, Raila is Uhuru’s preferred choice of a successor and this has thrown Deputy President William Ruto into a spin.

In 2011, Forbes ranked Uhuru Kenyatta among the top 40 wealthiest Africans.

As the head of the Kenyatta family, Uhuru has invested in nearly all sectors of the economy from banking, agriculture, education, mining, and real estate.

His net worth is estimated to be around KSh 70 billion.

Uhuru Kenyatta is married to Margaret Kenyatta. Uhuru previously revealed he met Maggy while in high school through friendship with her brother.

“I first met her brother. We went to the same secondary school and quickly became friends and it is through him that I managed to meet his younger sister and we started a relationship that has lasted from high school until now.

“I am thankful to God for that,” Uhuru said on his Facebook page which has since been deactivated.

The couple married at the Holy Family Basilica in 1989, a church they still attend to date.

Jomo has a wife, Fiona Achola, who delivered a beautiful baby girl a day to Uhuru’s 2017 inauguration.

In May 2020, Uhuru became a grandfather again after Achiola gave birth to a baby boy named after him.