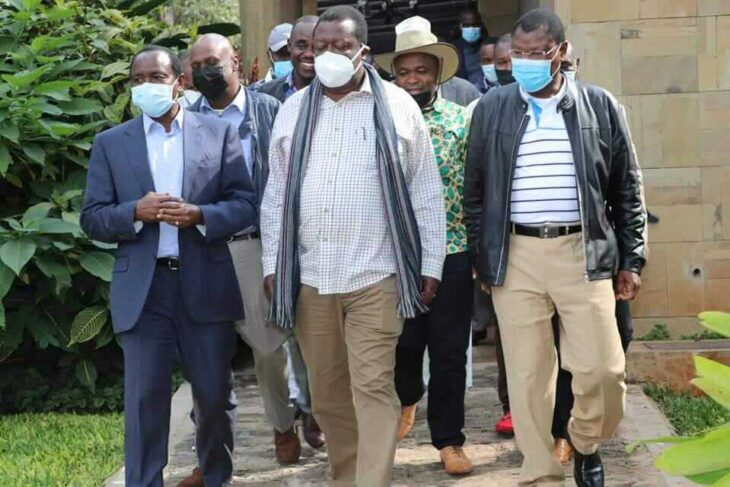 The official decision to kill NASA comes at a time when the One Kenya Alliance is staring at a possible union with ODM leader Raila Odinga. Photo: Kalonzo Musyoka/Twitter.

One Kenya Alliance Principal who is also Bungoma Senator Moses Wetangula is on the spot for allegedly stealing dogs from a Nairobi-based dog breeder.

According to James Isokat, he supplied Wetangula with well-trained and microchipped German shepherd dogs at his Karen residence on June 11, 2021, but the Senator has not paid the full amount.

Speaking to K24, Isokat likened the One Kenya Alliance Principal to a thief because he had taken his well-trained dogs, and refused to pay the whole cost as agreed.

“On June 11 this year Bungoma Senator ordered well-trained dogs and we delivered at his Karen residence, we charged him KSh348,100 but he only paid KSh100,000,

The remaining was to be collected the following morning but he hasn’t paid up-to-date. He has been taking me around with numerous threats from his security guards,” Isokat said.

In an Audio clip heard by Kivumbi.co.ke, Senator Moses Wetangula can be heard warning James against speaking to the press.

The Senator questioned James on why he had been speaking to the media about the issue.

“I have seen on the newspaper today, that ‘there is a Senator from Western who has taken someone’s dogs and refused to pay, and he has refused to go to the police don’t joke with me,” Senator Moses Wetangula is heard saying.

He went ahead to order the farmer to refund the Ksh 100,000 that he had been paid.

The farmer charged Wetangula the KSh 348,100 for training the dogs and feeding them.

However, Senator Moses Wetangula insists that he will no longer engage in the cat and mouse game with the farmer, demanding his KSh100,000 back.