Raila Odinga warned about the hostile ground in Mt. Kenya 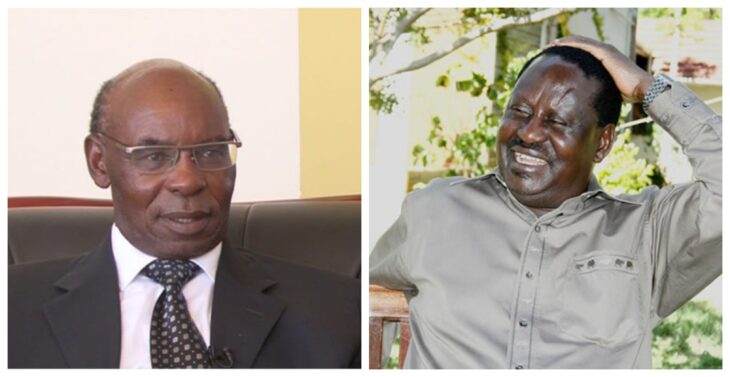 He argued that if the General Election is to be held today, the ODM party leader has minimal chances of clinching the presidential seat.

Speaking during a church service in Murang’a on August 29, Macharia told Raila Odinga’s allies in Mt Kenya region to be honest, tell him the truth about the political situation there.

He argued that if the General Election is to be held today, the ODM party leader has minimal chances of getting sufficient votes from the region.

Being a media owner, SK Macharia noted that his conclusion on the hostility of Mt Kenya politics against Raila Odinga comes from the intelligence information he gets.

“I wouldd like to tell Maina Kamanda, Ndaragwa MP Jeremiah Kioni and others, the way we know how things are on the ground, do not lie lie to Raila that the ground is okay,

“If we were to go and cast votes today, those people who have despised you (Raila) and President (Uhuru Kenyatta) would win the votes,” the Royal Media Services CEO Macharia said.

The Royal Media boss, who had accompanied Raila to the church service, promised not to abandon Raila.

These revelations come amid plans by Raila allied leaders in Mt Kenya to make him more appealing to the central region voters.

In a meeting held at SK Macharia’s home on July 27, the Mt Kenya leaders agreed to come up with strategies to increase Raila’s popularity in the region that has been ‘intoxicated’ with William Ruto.

“Our rivals have been traversing the region for four years and lied to our people that Raila is dangerous for the region, yet Baba has never done anything wrong. We want to counter that narrative,” Maina Kamanda said.

In their popularisation strategy, Maina Kamanda and his brigade aim at involving President Uhuru Kenyatta in selling Raila to Mt Kenya voters.

According to the Mt Kenya leaders, President Uhuru’s silence on his preferred successor has given opponents a playing ground in the central region and could work against Raila Odinga.