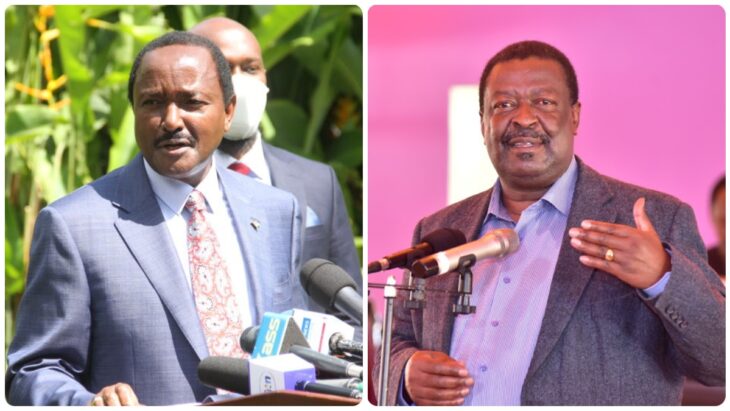 The two want the presidential ticket with Musalia arguing that he is accepted across the board, and Kalonzo saying he has majority of elected MPs.

One Kenya Alliance principals Musalia Mudavadi of ANC and his Wiper counterpart Kalonzo Musyoka seem to have over who should be the coalition’s flag bearer ahead of the 2022 presidential race.

With barely 11 months to the polls, the duo separately insists that they have the mettle, steel, and political muscle to outshine other presidential aspirants, a move that could soon tear apart the blossoming coalition.

With ANC leader Musalia Mudavadi insisting that his presidential ambition is unstoppable, Wiper leader Kalonzo Musyoka on his part maintains that he has played a second fiddle for ODM leader Raila Odinga and that it is his turn to vie for president.

ANC foot soldiers have maintained that Mudavadi must be on the ballot for the top seat just like Kalonzo Musyoka’s supporters are pressing their party leader not to shelve his presidential ambitions to someone else.

According to Amukowa Anangwe, an ally to ANC leader Musalia Mudavadi, it is probable that both Musalia and Kalonzo will be on the ballot, adding that ideally, Kalonzo should back Mudavadi for obvious reasons.

“Mudavadi’s backyard has more numbers than Kalonzo’s by more than two million people,” he said.

Mudavadi has however expressed his dissatisfaction in the manner in which the duo is scrambling to be the coalition’s flag bearer.

“It is absurd to talk about two presidential candidates from one coalition. ANC Party has given me the mandate to fly its flag in next years’ General Election. I am sticking to that mandate,” Mudavadi said.

Two weeks ago, the One Kenya Alliance principals held a two days retreat at a Naivasha hotel where they were to come out with the coalition’s flag bearer, a meeting that did not bear fruits.

The OKA principals announced that they will field their own presidential candidate in the 2022 General Election but they did not reveal their presidential flag bearer insisting that one of them will be on the ballot.

“We hereby unequivocally state that One Kenya Alliance will field a presidential candidate in next year’s General Election,” they said in a joint statement without revealing who they will front for the top seat.