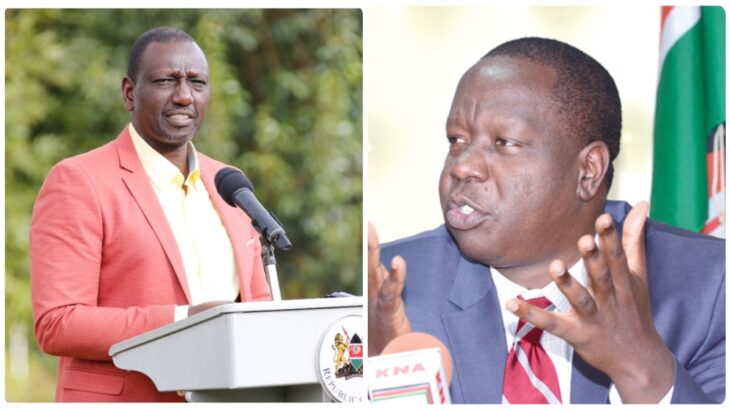 Deputy President William Ruto has taken a swipe at a National Assembly committee after it summoned Interior Cabinet Secretary (CS) Fred Matiang’i to shed light on the recent changes made the DPs security team.

The Interior CS is scheduled to appear before the National Assembly’s Committee on Administration and National Security on Wednesday, September 1, days after the DP’s security was restructured.

But taking to his Twitter on Tuesday, August 31, the deputy president urged the committee to focus on the deployment of security personnel to areas where bandits are causing mayhem and destruction.

“Parliamentary time should not be wasted on non-issues. Parliament should instead focus on deployment to serious security situations in areas where bandits are causing mayhem and destruction,” Ruto said.

On Thursday, August 26, officers from the General Service G-Company unit that form part of the Presidential security were withdrawn from the Deputy President’s official residence in Karen and replaced by the Administration Officers drawn from the Security of Government Buildings Unit.

The changes saw a total of 77 GSU officers were withdrawn from his residence and replaced with 26 officers from the Security of Government Buildings Unit (GBU) of the administrative police service.

While it appeared to Kenyans that the changes were a downgrade that could expose the DP to danger, the former Eldoret North Member of Parliament said those who think the changes made to his security team were downgrade are wrong.

“The Administration Police is a professional security service and those who think it’s a downgrade are wrong,” he said.

On Monday, August 30, DP William Ruto officially welcomed a new team of his security saying he does not mind being guarded by AP.

He said he is more than ready to be guarded by G4S adding that the GSU and AP can still be redeployed to protect the lives of vulnerable Kenyans who are in dire need of security.

“If the GSU have work to serve Kenyans elsewhere for instance those troubled with cattle rustlers, then they (APs) can assist me at home. And if the APs are also needed elsewhere, they can even bring G4S to my home. I have no problem,” Ruto said.