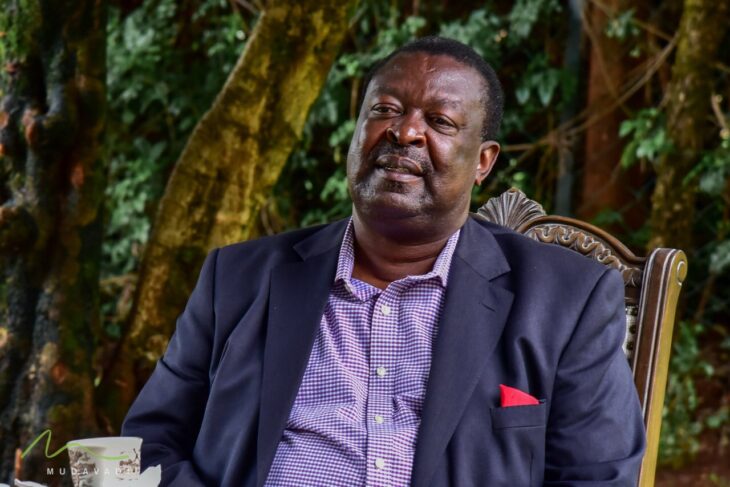 Wycliffe Musalia Mudavadi is a Kenyan politician and the Amani National Congress (ANC) party leader. Mudavadi began his political career at the young age of 29 years after the death of his father, who was a key figure in Western Kenya.

He has served in various capacities such as a vice-president, deputy prime minister, Cabinet minister. Mudavadi also unsuccessfully tried his stab at the presidency in 2013.

He was born in Sabatia village, Vihiga county. He is 60 years old.

Musalia Mudavadi went to primary school at Nairobi Primary School. He would then join Nairobi School for his A-levels before proceeding to the University of Nairobi for his Bachelor of Arts (Land Economics).

He later graduated from the same institution with his Masters in Land Economics.

Musalia Mudavadi political journey can be traced back to 1989 when his father, Moses Mudamba Mudavadi passed on.

Mudamba was a powerful politician and cabinet minister during late former president Daniel Moi’s era. After his death, Mudavadi was forced to step into his shoes and fill the void that his father had left.

He was thus elected unopposed for the Sabatia parliamentary seat in 1989, a position which he also won in the 1992, 1997 general elections.

Due to his father’s close relationship with the Moi family, he would soon get an appointment in the Cabinet. He first served as Minister for Supply and Marketing between 1989 and 1992 and later as the finance minister, a position he held between 1993 and 1997.

He also served in the Transport and Agriculture dockets in Moi’s government.

At the height of the electioneering period in 2002 where many opined he had a better chance at the presidency if he joined then-opposition Narc, Mudavadi opted to support Moi’s preferred successor.

Due to this, he was appointed Moi’s last vice president, a position he held for two months. He got the appointment in a bid to lure Western Kenya locals into voting for Uhuru Kenyatta, whom he had also deputized during the campaigns.

However, Narc’s Mwai Kibaki clinched the presidency defeating the Uhuru and Mudavadi combo.

In 2005, Mudavadi’s political career would get a major resuscitation following the 2002 humiliating loss of his candidature in both Sabatia and the vice-presidency.

He joined hands with the no-team that was against the proposed constitution and was a key player in the formation of Raila Odinga’s Orange Democratic Movement (ODM) which won in the plebiscite.

During the 2007 polls, Raila Odinga picked him as his running mate for his presidential bid under an ODM ticket. Mudavadi also announced his interest in reclaiming his Sabatia parliamentary seat under ODM, which he did.

The 2007 Kenya polls left the country in chaos and a coalition government between then-president Mwai Kibaki and rival Raila Odinga was formed. The formation of the government earned him an appointment as a deputy prime minister and local government minister.

Mudavadi resigned as deputy minister in the run-up to the 2013 elections to run for the presidency.

By this time, he had fallen out with Raila after castigating a clause in ODM which made Raila the automatic presidential flagbearer.

He joined the United Democratic Forum. He was picked as the presidential aspirant but he only garnered 4% of the votes in the 2013 presidential election.

In 2015, Mudavadi broke ties with UDF to form the Amani National Congress. ANC was part of the five political parties that merged in 2017 to form the National Super Alliance (NASA) which fronted Raila as its presidential candidate.

However, Raila was trounced by Uhuru Kenyatta who was seeking reelection.

So far, Mudavadi has already announced his bid for the presidency in 2022 under his ANC party. However, his association with the One Kenya Alliance may complicate his presidential bid as some of his co-principals who include Wiper’s Kalonzo Musyoka, Ford Kenya’s Moses Wetang’ula, KANU’s Gideon Moi are also eyeing the top job.

Just like a majority of Kenyan politicians, Mudavadi has always been hesitant to state his net worth. In an interview with K24 in 2019, he said he is not poor but fairly wealthy, further stating he owns some stakes in insurance companies.

However, some reports estimate his worth to be in billions of Kenya shillings.

Musalia Mudavadi is married to Tessie Shingati. The couple has been together for more than 30 years.

In a local interview a few years ago, Mudavadi narrated he met Tessie during a fundraiser in Lugari, Western Kenya. Tessie was, in 2011, diagnosed with breast cancer.

She leads a fairly low-profile life away from public scrutiny.